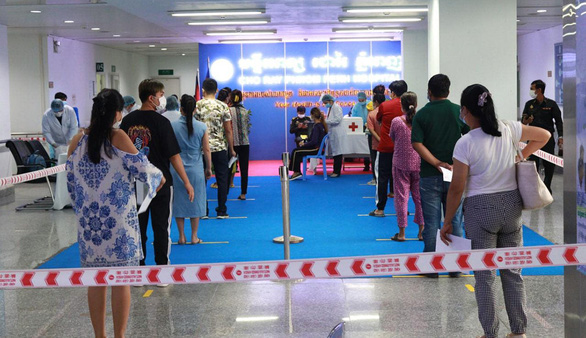 As the COVID-19 outbreak in Cambodia worsens by the day, Vietnamese doctors and staffers at Cho Ray Phnom Penh Hospital are spreading themselves thin to provide medical care and vaccines against the pathogen for the local community.

The number of coronavirus cases in Cambodia has so far surged past 11,000, with daily spikes recorded in the hundreds, while its fatalities have risen to 82, according to statistics.

“The situation is still intense, as daily caseloads are not going down, while the [Cambodian] government has done everything they could,” said Ton Thanh Tra, director of Cho Ray Phnom Penh Hospital, the Phnom Penh branch of Ho Chi Minh City’s largest general hospital Cho Ray, in a recent phone discussion with Tuoi Tre (Youth) newspaper.

As the outbreak in Cambodia is at its height and shows barely any sign of drawing back, Cho Ray Phnom Penh Hospital is also in the throes, with all medical staffers having to take extra shifts to cover the workload.

Tra himself is no exception, as he now has to play a dual role as a manager and a practitioner for critical cases.

The COVID-19 outbreak first 'visited' his hospital in mid-April, when a patient in grave condition, with their heartbeat and breathing stopping, was admitted to the facility, he recalled.

He died shortly after, but his test read positive for the coronavirus, forcing eight emergency practitioners to go into quarantine.

A few days later, the hospital had to send 11 of their nurses to the quarantine ward after two other patients they had tended to tested positive for the pathogen.

“The emergency department has enough manpower for four teams working rotating shifts, yet as many as two teams of practitioners were quarantined, which forced the others to work twice as hard,” Tra pointed out.

On April 23, the workforce of the hospital got cut even more, as 16 staffers under the general internal medicine department had to be isolated for their direct contact with a patient’s caretaker, who had just tested positive for COVID-19.

Considering the situation, the hospital had to shut down the whole general internal medicine department as well.

Counting from the ‘Phnom Penh Community Incident’ on February 20, when two women infected with COVID-19 fled quarantine and enkindled Cambodia’s worst outbreak to date, Cho Ray Phnom Penh Hospital has seen 35 of their staffers going into quarantine, the majority of whom are from emergency and general internal medicine departments, two of the most crucial wards of the medical facility.

The most pressing challenges

Since its launch in 2014, Cho Ray Phnom Penh Hospital has always received assistance from some Vietnamese doctors and practitioners from Cho Ray Hospital in Ho Chi Minh City to facilitate technology transfer and guide specialized operations.

However, that support is now disrupted as the pandemic has crippled all cross-border travels.

For now, the hospital only reports some 20 Vietnamese staffers working as resident doctors and practitioners.

Under such circumstances, the pressure piles up on Ton Thanh Tra and Le Xuan Hang, two key executives in charge of running the hospital.

Considering the severity of the outbreak in Phnom Penh, the hospital's leaders are making pivotal decisions to keep the facility safe.

They added two checkpoints to perform meticulous COVID-19 screening, as guided by the Cambodian Ministry of Health, for all people coming through the gate of the key wards, namely the emergency and general internal medicine departments.

The most challenging issue that remains, according to Tra, is the monitoring of patients’ caretakers.

“We have instructed that each patient only have one caretaker, but the Cambodians still stick with their habit of visiting their sick members in droves, which significantly increases transmission risks,” Tra said.

Despite the tough battle that waits ahead, practitioners at Cho Ray Phnom Penh Hospital still manage to fulfill their tasks, which includes the roll-out of over 2,000 doses of Chinese-made COVID-19 jab Sinopharm to the Cambodian people.

Going through one year with his job in a foreign country, Tra has yet to set a specific date when he can be reunited with his two daughters in Vietnam due to the border restrictions and immense workload.