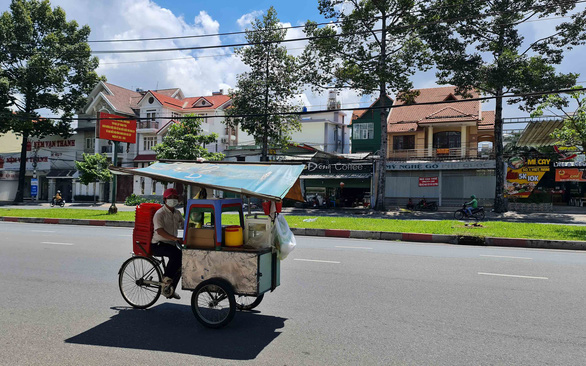 After a month of social distancing to deal with the fourth COVID-19 outbreak put many residents of Ho Chi Minh City out of work, some are scraping by without an income while job market prospects remain tenuous.

Cooped up with the trapped summer heat inside a 15-square-meter rented room in Tan Phu District of Ho Chi Minh City, 28-year-old Dang Thi Ly just got off a phone call with her two sons in her hometown northern Hai Duong Province.

She let out a deep sigh, obsessed with how to pay her kids' tuition.

Not many options seem to be left for Ly, as she lost her job at a garment factory in early June, when social distancing measures were reintroduced in Ho Chi Minh City to combat an upsurge of new COVID-19 cases.

Ly and her husband Le Van Khanh just moved to Ho Chi Minh City for work in April. After landing a job at a factory in Go Vap District, she only got to work there for two months before the facility was put on lockdown following the detection of a coronavirus case.

“As the orders were terminated, the company had to lay off personnel, so I lost my job in early June,” she recalled.

With VND6 million (US$262) of salary in hand, she had to impart half of the amount to pay her sons’ tuition, which left her with only VND3 million ($131) for rent, food, and savings in the upcoming days.

Meanwhile, her husband Khanh has managed to keep his job at Tan Thuan Export Processing Zone in District 7, but as his firm spaces out workers on the premises to ensure social distancing, he had no choice but to work less hours with a rotating schedule.

Khanh is looking to moonlight as a ride-hailing driver at night, which Ly is not fond of as she thinks her husband works hard enough.

With a shrunken budget, the couple must cut all expenses to the bone.

“I bought a box of ramen noodles and live off it these days," she said.

"I only afford meat and fish for my husband every few days, as he needs protein to be able to work.

“I have to keep the cost for books and uniforms for my kids in mind, as they are about to enter a new school year.”

Ly said she will look for a new job once the epidemic wanes, as no one seems to be hiring these days.

Her situation is not by any means an anecdotal case: around 230,000 informal workers in Ho Chi Minh City have suffered from income cutbacks or job losses due to the pandemic, according to statistics from the Ho Chi Minh City Department for Labor, War Invalids, and Social Affairs.

The story is the same at Nguyen Thanh Hai’s household from Binh Thanh District, for they are scrambling to make a living during this health crisis.

A worker in the hospitality industry, Hai has been put out of work multiple times in the past year as the pandemic placed the whole sector in shambles, forcing hotels to close en masse.

He then had to switch to work as a driver for ride-hailing apps and food delivery services to eke out a living, as the job is one of the few that seem to stay lucrative during the social distancing period.

“The job is taxing, but I can’t quit as I still have two months of rent, food expenses, plus schooling costs for my little brother, and more to pay,” Hai said before leaving promptly for a new order that the app just picked up for him.

Sitting in a rented room on Tan Ky Tan Quy Street in Binh Tan District, Tran Van Bay and his wife are yearning for the situation to return to normal.

“I wait tables for a diner, but it has been closed for months, leaving me with no income,“ Bay’s wife revealed.

“We now depend on Bay’s job at a nail manufacturing workshop, but it only pays him VND4 million [$175] a month. How can a family of three, plus our dependent parents, live off that?”

Bay is looking for more jobs to cover the family’s bills, but the prospect seems bleak.

“Picking up gigs at the moment seems harder than picking up money on the street," he lamented.

"No one seems to hire these days.”

As public parks have been shut down and foot traffic on the streets has also drastically shriveled, the livelihoods of street vendors are in jeopardy.

Nguyen Thi Phan, 39, a street vendor from Hanoi who peddles near Tam Vu Street in Binh Thanh District, said she suffers more during this outbreak compared to the previous.

“For now, there are more sellers than buyers, which makes the business much less lucrative.”

Phan’s husband, who is a street peddler, has stayed home for over a month due to poor sales, turning her the sole breadwinner of the family.

She now has to cover the expenses, including rent, groceries, money owed to suppliers, and a sum to support her three children back at home, all by herself.

Also facing difficulties is a fruit stall on the side of Tran Van Giau Street in Binh Tan District -- the source of Ly Thi Ha and her husband’s daily income.

Once turning enough profit for the family, the stall is no longer selling well as the nearby Pouyuen factory -- where most of its customers come from -- was shuttered following the detection of a COVID-19 cluster.

Ha cannot switch to selling in local markets as they were closed pursuant to the social distancing mandate.

“I can only push the cart to the streets and hope for the best," Ha said.

Nevertheless, they are still expected to send money back to Ha’s parents, who are looking after their child in southern Kien Giang Province.

“I have sold my only gold ring to make it through this month,” Ha professed.

“I don’t know if I can pull through when the situation drags out any longer.”