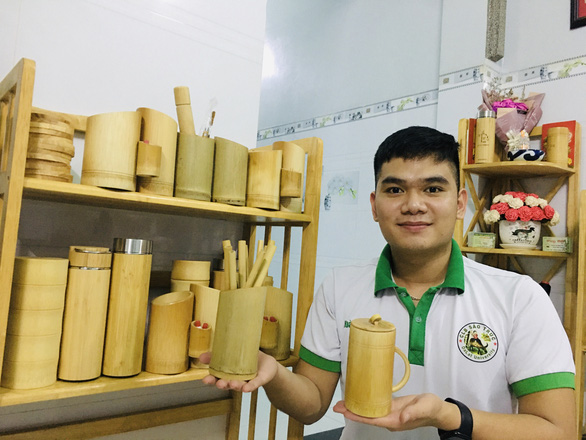 In the hope of adding value to his hometown’s pride, vast bamboo forests, Nguyen Le Hoang Nhan from the Central Highlands province of Lam Dong is transforming bamboo and rattan into fine-quality household and decorative items.

Convinced that the use of bamboo should not be limited to fertilizing asparagus, the 23-year-old always yearned to do something for his hometown, known for its abundant supply of bamboo.

With that belief in mind and an inclination nurtured since his university years to start a business, Nhan created his company producing household and decorative items from bamboo as replacements for plastic products.

Majoring in law at Da Lat University, located in the namesake city which is the capital of Lam Dong Province, Nhan observed with sadness his fellowmen harvest bamboo all year round for asparagus fertilizer.

During his third year in college, he began to map out his unconventional route to tap into the plentiful bamboo and rattan reserves his hometown is blessed with.

Vietnam is one of the few countries in the world to be endowed with such an abundant resource.

The young man emphasized utilizing resources from his own hometown in the business will benefit his fellow countrymen as well.

He invested his savings from the money he earned from odd jobs during his college years, ready to get his Da Lat Bamboo company through its launch stage.

While producing bamboo-based items in what is known as one of the country’s biggest reserves and also a tourist hub in the Central Highlands seems like a natural move, Nhan’s journey to get the business off the ground was not without its challenges.

Without a background in business, the daring man signed up for courses and taught himself how to really ‘understand’ bamboo.

The initial time was the hardest. Yet he pressed forward even with problems in procuring supply, carrying out the production process on a trial-and-error basis, and commercializing his products.

“What I found most challenging is how to really ‘understand’ bamboo, that is, if each of them is old enough and what they are fittest for,” Nhan shared.

The budding entrepreneur faced another challenge: machinery and equipment needed for bamboo production.

As machinery meeting his requirements was not available, he worked with his team to build their own, a task that he said is highly time-consuming.

His hard work later bore fruit, as his debut products, ranging from bamboo straws, drinking vessels, toothbrushes with bamboo handles to containers in which shan tuyet tea, a specialty generally grown by ethnic minority groups in the north of Vietnam, is brewed for its unique aroma, have found a market.

As his business acumen garnered through his own research and networking with veteran entrepreneurs grew, slowly but surely, his business began to thrive.

After overcoming numerous obstacles, Nhan has carved out a successful career for himself with a 1,500-square-meter factory, where he employs about 20 seasonal workers from around town.

His factory churns out approximately 50,000 bamboo straws and 1,000-3,000 other products each month and sells them to outlets.

The items, which come in different designs, sizes and uses, are priced from some dozens of dong to hundreds of dong (VND100,000 = US$4.38) apiece.

According to Nhan, the process of creating a bamboo-based item includes several phases which focus on ensuring each piece’s esthetic and durability without detracting from the medium’s natural features.

Each day, the team at Nhan’s factory selects bamboo plants and dries them before boiling them in salted solutions, processing them into desired shapes, and sterilizing them.

Nhan added that to enhance product durability, his team only picks plants that are two years old or more.

In his attempt to produce the premium products, he has put a lot of effort into material processing, making sure they can maintain their natural color without the use of chemicals.

The entrepreneur said he steams the products in natural essential oils to keep them free of fungi.

He places strong emphasis on green and sustainable development, though his products are more expensive than their plastic counterparts, which means greater difficulty in reaching more customers.

Apart from staying clear from chemicals, his team makes it a point to harvest bamboo and rattan in season while encouraging local farmers to grow more to sustain a steady supply and preserve what they have.

Nhan revealed he is currently targeting products from areca sheath as his next venture.

He has a message for young people like him.

“I really hope our project will get locals to work together and protect the environment,” Nhan said.

“The responsibility rests on each of us, particularly the young.”

Like many businesses, Nhan’s workshop has been hit quite hard by the COVID-19 pandemic regarding product distribution.

The young man turns this quiet time into a good opportunity to conduct research into new products while having his eyes set on European markets and working to meet their stringent requirements to prepare for export once the latest wave, which began in late April, is finally under control.

Nhan’s products have been warmly embraced by customers.

“Many pieces are unique and embody high creativity,” said Ho Kieu Oanh, one of his customers, adding she often chooses toothbrushes with bamboo handles which are replaced every three and four months.

“The products are good for both human health and the environment,” Oanh noted, adding children can make their own drawings on the toothbrushes.

“I want to encourage the young man’s green startup initiative.”

Bringing Vietnamese bamboo to the world

Nhan inked a deal to export his environment-friendly products to Australia in 2019.

About two shipping containers of such products have made their way to that market since.

The aspiring entrepreneur has gone over the track and fine-tuned his products in adherence to stringent requirements set by Japanese and German importers and brought his pieces to these two countries, where they are making quite a splash among environmentally-conscious buyers.

He also has his gaze fixed further.

“In the future, I want to showcase more of my items to international customers who will instantly think of Vietnam when they get their hands on the pieces,” Nhan shared.