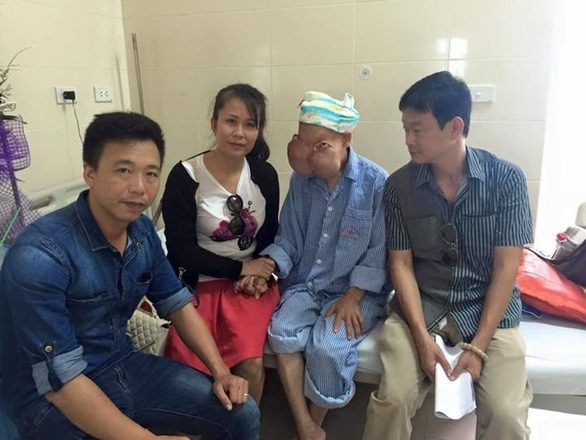 Two ethnic minority women residing in the northern mountainous province of Cao Bang have had sunny smiles back to their once-disfigured faces and warmth to their hearts thanks to life-changing operations made possible by donations.

It has been five years since Trieu Mui Chai, 74, and Ly Mui Xien, 53, from Nguyen Binh District, got their faces, smiles and confidence back following surgeries to remove a giant facial tumor that obstructed their breathing, eating, vision and other daily activities.

They would not have been able to make it this far if not for philanthropists’ donations and their doctors’ dedication.

Chai’s and Xien’s tumors grew to the point that they occupied most of their faces, leaving them the subject of ridicule and scorn from those around.

Even Chai’s grandchildren and the local kids were afraid of her tumor, with some often bursting into loud screams upon seeing her face.

By then, her face was mostly consumed by the abnormally red swelling lump of blood vessels which seemed it could burst any time.

There were moments when the women even wished to die to end what they had suffered physically and mentally for more than two decades.

Though Chai’s tumor was larger than that of Xien, the former’s surgery came some months later than the latter’s.

Chai blissfully shared in Kinh, the country’s official language, that she is happy with her new appearance after her operation.

The septuagenarian added she can now breathe, chew and sleep better now that her tumor is gone and her health condition has improved.

Though the tumor took one of her eyes away, Chai can have two bowls of rice with ease for each meal now and can also see better without having to lean to one side for better vision.

Before her operation, the woman would find herself at the end of the condescending stare and had no choice but to keep her feelings bottled up.

She would shrink away from local people and children, who called her names and nicknamed her a ‘demon-faced woman’.

Now she can enjoy the company of her grandchildren and local kids and go food shopping at fair-like market sessions and dine at eateries to her heart’s content without being the target of malicious stares and discrimination.

“My mom is a happy woman now. She feels better, works on the fields and fetches firewood every day,” said Ban Mui Pham, Chai’s daughter.

Chai’s elation is shared by Xien, who now also finds herself feeling increasingly relaxed in social situations and no longer self-conscious in public.

The middle-aged woman has been able to communicate, eat and drink more easily since her operation five years ago, and is breathing without difficulty.

Her son, Hoang Sun Kinh, showed his mother eating with ease in a recent video call with a Tuoi Tre (Youth) correspondent.

A good-looking, kind woman of Dao ethnic minority group in her youth, Chai earned her living as a merchant and enjoyed a socially active life.

She got married four times and now lives with her fourth husband.

When Chai entered middle age, a lump started to grow on the woman’s face and failed to go down.

Though it caused her no pain back then, the clump kept growing uncontrollably ever since.

“The doctors told us there was not much they could do with my mom’s condition,” recalled Pham, Chai’s daughter.

The cost of a surgery was too high for them to afford and the operation might even cost her mother her life, she added.

The tumor quickly progressed into a major portion of Chai’s face and grew even bigger than her head.

The eerily-shaped, red, succulent clump was riddled with blood vessels which could seemingly burst any time.

The tumor compressed her nose, eyes, jaw, causing nasal obstruction and loss of the left eye vision, with fluid and blood from the eye dribbling onto her neck.

The tumor already spread to her nose, making it difficult for her to breathe and impeding her ability to eat and speak.

She might even never wake up the next morning if the tumor, in the wrong position, blocked her windpipe and choked her to death.

She suffered excruciating toothaches after giving birth to her third child.

She took the pain bouts for granted and did not take medical treatment over her financial difficulty until some times later.

Her family was also told to take her home as a surgery may cost them a fortune and Xien her own life.

Chai and Xien would have died from life-threatening complications from their tumors if not for philanthropists’ support.

“We were all shocked seeing her face for the first time,” Anh said.

“I was determined I would do something to help this poor woman.”

He called for donations for Xien’s treatment after posting her image on social media and accompanied her to Hanoi-based National Cancer Hospital K1 for a surgery.

“Her wish was to have a normal face even if she didn’t pull through,” Anh recalled about the eight-hour surgery.

The operation was a success.

“Xien asked for a mirror as soon as she regained consciousness. Despite the bandage, our group could still sense her elation,” added Anh, whom Xien later considered ‘the one who gave birth to her the second time’.

Chai’s tumor removal surgery came around five months after Xien was operated on.

According to Prof. Dr. Trinh Dinh Hai, the hospital director and head of the surgery team, Chai’s case was further complicated by her pre-existing condition, Meningocele, which had gone for years without any treatment.

Doctors from the establishment and Viet Duc Hospital, also based in the capital city, collaborated to treat her tumor.

The 10-hour surgery succeeded as expected.

Chai made a quick, full recovery and was grateful for the miracle she received.

“As soon as she began recovering, Chai traveled more than 100 kilometers to visit me in the city,” Phuong shared.

“She trusted and considered me her son.”

Two years on, Dr. Hai personally made a visit to Chai to check on her wound.

The elderly woman could not hide her tears of joy, smiles and hopes lighting up her face.