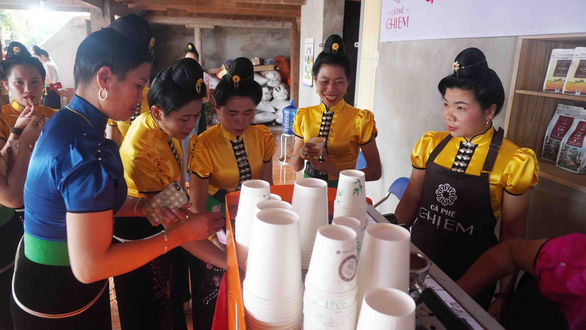 In the upland village of Na Luong in Dien Bien Province, a collective of Thai farmers, led by young entrepreneur Pham Thi Hoai, is striving to give local Arabica coffee beans a new lease on life as top-shelf products in the prestigious market for specialty coffee in Vietnam.

These days, people will likely find Pham Thi Hoai with her work garments on, hair tied up in a bun, and hands either taking care of the rice field in the harvesting season in the northwestern region or tending to the maturing coffee cherries.

If she is not in the field, then she will be in her front yard moving between machines to oversee the process of coffee roasting, from roasting, grinding, and packaging to labeling.

One of the largest coffee exporters in the world, Vietnam has seen its coffee market flooded by products from the Central Highlands region, which arguably overshadow quality productions from other areas like the northwest region.

According to local documentation, the French colonialists introduced fine strains of Arabica coffee to northwestern plantations in the late 19th century after noticing the soil and climate conditions were perfect for these varieties.

In the following years, the northwestern coffee crop grew larger in size, proving itself as one of Vietnam’s key coffee production regions.

At every mention of the local coffee, Hoai departs a little from her reserved demeanor and becomes visibly more animated, as the crop has been following her through many walks of life: from learning the ropes of coffee husbandry from her parents since the age of 17, she went on to take over the care of a 1.5-hectare acreage of coffee from her husband’s family.

In the early 2000s, she and her husband started out with virtually no resources to their name, and Hoai had to work at the farm of a more affluent family in the village to further learn the trade of coffee growing -- while also gaining money to support her enterprise.

“I made around VND10,000 [US$0.63] a day at the time, which I had to split between my childcare duties and fertilizer costs for the farm,” she recalled.

Following years of trial and error, Hoai managed to pick up the trade, which helped her coffee trees grow up healthy and fruitful.

However, the struggle was not over yet.

Because Hoai and her fellow farmers did not own the means to further process their beans, they remained at the lowest end of the value chain, which left them with no choice but to sell the unrefined fresh cherries.

Parchment coffee, referring to beans that have undergone fermentation and drying, yields better profits, but the cost for equipment is overwhelming for most small farmers.

Faced with a barrier to higher profits, many coffee farmers in Na Luong opted out, razing their coffee farms to switch to short-season crops, namely passion fruits, corn, and cassava.

Nevertheless, Hoai remained steadfast with the coffee plants, even working harder to compensate.

In the end, the opportunity finally presented itself to her

In 2019, she was asked by the nonprofit organization CARE to join an initiative for innovation in coffee production and distribution in her area.

“Back in the day, the CARE officer asked me if I was passionate about coffee enough; if I was committed enough to the endeavor. I simply replied: 'I’m committed to it with my life,'” she told Tuoi Tre (Youth) newspaper.

In July 2019, the Ca Phe Chi Em collective was established with the effort and labor of four Thai families, as well as the support for machinery and equipment from the Australian Department of Foreign Affairs and Trade.

For the first time, the coffee farmers in the northwestern village were able to learn the various steps up the coffee value chain: from fermentation, drying, roasting to grinding.

Such an undertaking was daunting for them at first, but they were not afraid to put in more work.

After attending technical training classes in Hanoi, as well as farm visits in Lam Dong Province in the Central Highlands, Hoai and the members have slowly built up the capability, which primes them for the next step, launching a coffee brand.

In mid-May, the group organized a premiere event for their first retail-ready ground coffee product, made entirely with their own production.

Instead of being put in a meeting room, the event was held in the unassuming setting of Hoai’s front yard, where visitors could see the machinery and watch a coffee package be made from scratch.

Dressed in their traditional Thai attire, the women of Ca Phe Chi Em took rotating shifts to brew fresh cups of coffee behind the large, shiny espresso machine, a sight rarely seen in this region.

Another group handled the packaging, swiftly stamping the 'specialty coffee' tag on sealed packs before handing them out to customers.

They served hundreds of cups that day, but no one seemed to lose the smile on their faces.

Hoai sees the launch of the brand as a success, but at the same time, she is aware that it is just a start.

The group leaders and members are mulling over a range of projects for the upcoming months, namely a homestay facility for coffee lovers; applying to represent their commune in the national One Commune-One Product (OCOP) program; or expanding their coffee sourcing programs to surrounding coffee farmers in the village to help them move up the value chain.

They are preparing to bring their product to the next Vietnam Specialty Coffee Contest, where they would get the chance to legitimize the 'specialty' title -- an achievement they have longed for since the outset.