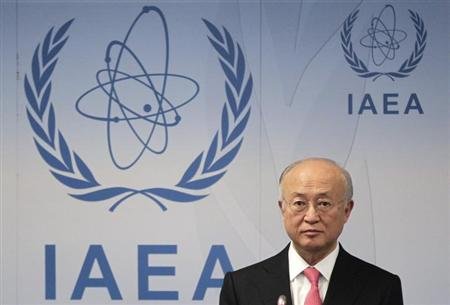 The U.N. nuclear watchdog chief said on Monday talks with Iran have been "going around in circles" - unusually blunt criticism pointing to rising tension over suspected nuclear arms research by Tehran that has increased fears of a new Middle East war.

Yukiya Amano, director general of the International Atomic Energy Agency, vented growing frustration at the lack of results in getting Iran to address suspicions of military dimensions to its atomic energy programme. Tehran denies the accusations.

In hard-hitting comments to the IAEA's 35-nation Board of Governors, he also said Iranian advances in building a heavy-water research reactor and in its uranium enrichment work were in "clear contravention" of U.N. Security Council resolutions, dating to 2006, calling for a suspension in such activities.

The IAEA has been trying since early 2012 to engage with the Islamic state over what the Vienna-based U.N. agency calls the "possible military dimensions" to Iran's nuclear programme.

But ten rounds of negotiations in the last 17 months have failed to achieve any breakthrough. Western diplomats accuse Iran of stonewalling the IAEA, an allegation Tehran rejects.

"Despite the intensified dialogue between the agency and Iran since January 2012..., no agreement has been reached on the structured approach document. To be frank, for some time now we have been going around in circles," said Amano.

"This is not the right way to address issues of such great importance to the international community, including Iran," he said, according to a copy of his speech to the closed-door board meeting at the IAEA's headquarters.

Israel, widely assumed to be the Middle East's only nuclear-armed state, sees Iran's declared civil nuclear programme as the most serious risk to its security and has threatened military action if diplomacy and sanctions fail to make Tehran hold back.

Amano said: "We need to achieve concrete results without further delay to restore international confidence in the peaceful nature of Iran's nuclear activities."

The IAEA has "solid grounds for requesting clarification in relation to possible military dimensions", he added.

Amano spoke at a time of apparent deadlock in a broader diplomatic initiative by six world powers to find a peaceful solution to the decade-old dispute over Iran's nuclear ambitions. Western diplomats say they are awaiting the outcome of Iran's June 14 presidential election but do not anticipate any notable shift in the country's nuclear defiance.

Iran, a big oil producer now under harsh Western sanctions against its lifeblood export sector, says its nuclear programme aims to meet the electricity needs of a rapidly growing population and advance some areas of scientific research.

But its refusal to suspend nuclear activity with both civilian and potential military applications in defiance of U.N. Security Council demands, and its lack of full openness with the IAEA, have fuelled suspicions abroad about its ultimate goals.

"Iran is not providing the necessary cooperation to enable us to provide credible assurance about the absence of undeclared nuclear material and activities," Amano said.

"I urge Iran to fully implement its (nuclear) safeguards agreement ...and engage with us to achieve concrete results in resolving all outstanding issues with a sense of urgency."

Western and Israeli worries about Iran are focused largely on its uranium enrichment work, as such material refined to a high level can provide the fissile core of an atomic bomb.

But diplomats and experts say a heavy water research reactor being built near the town of Arak could give Iran an alternative ingredient - plutonium - for nuclear bombs, if it were to decide to build such weapons of mass destruction.

An IAEA report issued to member states last month showed the Islamic Republic pressing ahead with the construction of Arak, including the delivery to the site of the reactor vessel.

Such a plant could yield plutonium for the core of a nuclear bomb if the spent fuel were reprocessed, something Iran says it has no intention of doing.

"Iran continues to advance its heavy water-related projects," Amano said. The lack of updated design information about the plant "is having an increasingly adverse impact on our ability to ... implement an effective safeguards approach."