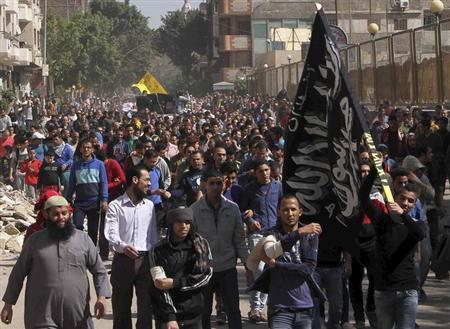 An Egyptian court sentenced 529 members of the outlawed Muslim Brotherhood to death for murder and other offences on Monday, in a sharp escalation of a crackdown on the movement that is likely to fuel instability.

Family members stood outside the courthouse screaming after the verdict - the biggest mass death sentence handed out in Egypt's modern history, defence lawyers said. Supporters set fire to a nearby school in protest, state television reported.

Turmoil has deepened since the army overthrew Egypt's first freely elected president, Mohamed Mursi of the Muslim Brotherhood, in July. Security forces have killed hundreds of Brotherhood members in the streets and arrested thousands.

Most of the defendants at Monday's hearing were detained during clashes which erupted in the southern province of Minya after the forced dispersal of two Muslim Brotherhood protest camps in Cairo on August 14.

Islamist militants have also stepped up attacks on the police and army since Mursi's ouster, killing hundreds and carrying out high profile operations against senior interior ministry officials.

"The court has decided to sentence to death 529 defendants, and 16 were acquitted," defence lawyer Ahmed al-Sharif told Reuters. The condemned men can appeal against the ruling.

State television reported the sentences without comment. A government spokesman did not immediately respond to calls.

The Muslim Brotherhood, largely driven underground, responded by calling for the "downfall of military rule" on its official website.

Mohamed Mahsoub, who served as minister of legal affairs under Mursi, described the court's decision "a ruling calling for the execution of justice" on his Facebook page.

The sentences came days before army chief Field Marshall Abdel Fattah al-Sisi was expected to declare his candidacy in presidential elections. He is widely expected to win.

The charges against the group, on trial in Minya since Saturday, include violence, inciting murder, storming a police station, attacking persons and damaging public and private property.

"This is the quickest case and the number sentenced to death is the largest in the history of the judiciary," said lawyer Nabil Abdel Salam, who defends some Brotherhood leaders including Mursi.

The verdict was sent to the grand mufti, Egypt's highest religious authority, for consideration, a judicial source said. The mufti's opinion is not binding.

HA Hellyer, an Egypt expert and fellow at American think-tank the Brookings Institution, said he doubted the sentences would be carried out.

"Nevertheless, the very issuing of the sentence itself is quite significant," he added.

Only 123 of the defendants were in court. The rest were either released, out on bail or on the run.

"When the trial starts on Saturday and it is just a procedural hearing, and the judge doesn't listen to any lawyers or witnesses and doesn't even call the defendants, you are before a group of thugs and not the judiciary," Walid, a relative of one of the defendants, said by phone.

It was not possible to confirm his account of the proceedings independently.

The government has declared the Brotherhood a "terrorist" group. The organisation says it is committed to peaceful activism.

Analysts say some of its members could turn violent if the state keeps up pressure on the movement, which won the vast majority of elections since an army-backed popular uprising toppled autocrat Hosni Mubarak in 2011.

Egyptian authorities make no distinction between the Brotherhood and hardcore militant groups based in the Sinai peninsula who pose a major security challenge to the state despite army offensives against their fighters.

Mursi and other top Brotherhood leaders, who are on trial on a range of charges, accuse the military of staging a coup and undermining democracy.

The army says it was acting on behalf of the Egyptian people, who took to the streets in their millions to call for Mursi's resignation.