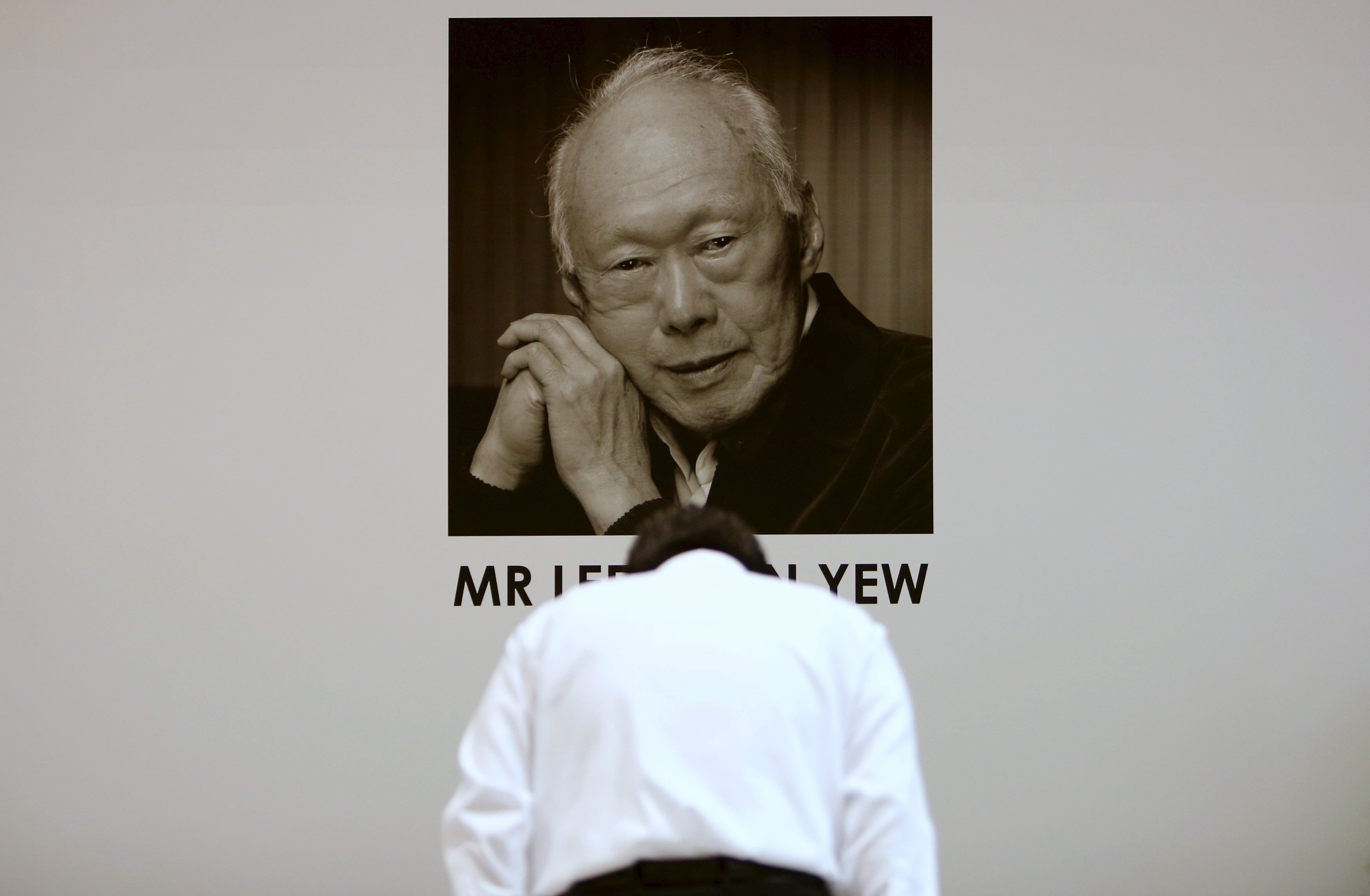 Dozens of Asia's best and brightest government officials each year join what has become known as the "Mayors' Class" - studying good governance, economic management and how to make their countries work like Singapore.

Their mentors at two of the city-state's top universities are high-flyers from Singapore's political, government and financial sectors, who reveal the secrets of what it takes to make a country efficient, competitive, and rich.

Equally, many of the students are drawn by Singapore's system forged in the image of its first Prime Minister Lee Kuan Yew, who died on Monday aged 91, that rewards politicians with executive-level wages.

For countries such as China and Myanmar, the vibrant state built by Lee could be the answer.

The city-state boasts one of the highest proportions of millionaires in the world, and an economy that is the envy of many developed, let alone emerging, nations. As a result, dozens of countries are sending civil servants to study the Singapore way.

The bulk of the students are Chinese, and many have progressed to become mayors, governors and vice ministers - hence the Mayors' Class moniker for the course run by Nanyang Technological University (NTU) and the National University of Singapore (NUS).

Wang Zhenping, head of research at the standing committee of the provincial legislature in the northern Chinese province of Hebei, studied at NTU from 2005-2006 and wrote a book about his experiences.

"For China in particular, Singapore is geographically close, culturally similar and has a wealth of experience at managing markets."

The model that drew the likes of Britain's Tony Blair to the tiny Southeast Asian state seeking ideas for welfare reform has lately come under strain at home, as some Singaporeans have complained it favours the privileged and wealthy.

But developing states across a region where poverty and graft are widespread remain wowed by Singapore's clean streets, low levels of corruption and dynamic economy.

Rowena Tan, a judge in the Philippines, is among thousands of graduates of training programs in public administration and governance in Singapore, and said its bureaucracy was still the model to emulate.

"The program gave us the best training from both worlds - the East and the West," she said. "We were told that this is one of the reasons for the success of Singapore - it studies and learns what is best in other countries and tweaks it, adapts it to local conditions."

After 49 years of military rule, Myanmar is eyeing the Singapore system as it transitions to democracy.

A senior official from the president's office in Myanmar said that the country had been sending its senior and middle-level officials to Singapore, as well as other countries.

"This is the president's idea to carry out capacity building for government officials at all levels and to learn the experience of these countries in good governance ... and public administration," said the official, who attended one of the schools in Singapore.

Wealthy Singapore has long fascinated Beijing's leaders for its ability to combine popular elections and a British-style parliamentary system with decades of unbroken rule by the People's Action Party co-founded by Lee.

Though a recent anti-corruption campaign has affected the number of Chinese government officials allowed to travel overseas for training, Singapore's allure has not diminished.

Despite doubts among some in the Communist Party over whether many of Singapore's economic and social policies are meaningful for a much larger and more diverse country, traces of Singapore can be seen dotted throughout China.

Industrial parks have sprouted around the country, after the first of its kind was developed by Singapore in the city of Suzhou more than 20 years ago. Some cities have lined their boulevards with wide green belts - a nod to Singapore's "Garden City" campaign.

"The rapid urbanisation in China means that many things Singapore, as a city-state, has done are worth learning," said Mao Shoulong, a professor at the School of Public Administration and Policy at Renmin University in Beijing.

"(Singapore's) high-standard municipal management, high-quality public administration is worth something to almost all Asian cities."

Courses on urban planning and governance, as well as anti-corruption, are among the most popular, said Louise Beehag, head of the executive education department at the Lee Kuan Yew School of Public Policy at NUS.

Students are also watching how Singapore tackles pressing issues of its own - from the rapid influx of foreigners to a widening income gap - that have upset its citizens and cost the party a record number of seats at the last election.

"Every country will have policy challenges, and the important thing is how countries respond to these challenges. Singapore has a strong civil service, and its responses to policy issues are quite thoughtful," said Beehag.

Tan, one of about 130 alumni from the Lee Kuan Yew School in the Philippines, said Singapore's draw as a model is because "it's a country that delivers".

"It keeps on improving its services and never lets up. And, it walks the talk."