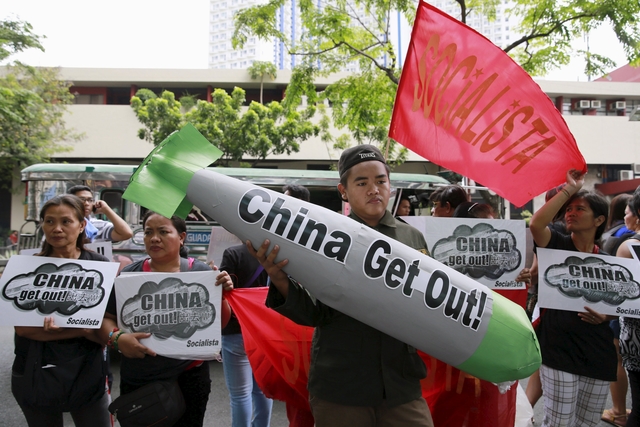 Chinese Vice Foreign Minister Liu Zhenmin said on Monday the disputed East Vietnam Sea should not be discussed at a meeting of the Association of Southeast Asian Nations (ASEAN).

Liu, speaking to Reuters on the sidelines of the 48th ASEAN Foreign Ministers' Meeting, which kicks off in Kuala Lumpur on Tuesday, said the meetings should avoid all talk on the sensitive issue, adding that countries outside ASEAN should not interfere.

"It should not be discussed," said Liu. "This is not the right forum. This is a forum for promoting cooperation. If the U.S. raises the issue we shall of course object. We hope they will not."

The issue was not on the official agenda, but expectations had been high that it would be discussed against a backdrop of increasing tensions and overlapping claims in the potentially energy-rich East Vietnam Sea.

The United States, worried about China's increasing assertiveness in the region, is expected to repeat a call for Beijing to halt land reclamation on islands in disputed waters.

Neither the United States nor China are members of ASEAN, but have been invited to participate alongside other countries outside the group. U.S. Secretary of State John Kerry will be in Kuala Lumpur on Wednesday and Thursday.

China claims most of the East Vietnam Sea, through which $5 trillion in ship-borne trade passes every year, and rejects the claims of Vietnam, the Philippines, Brunei, Malaysia and Taiwan.

The Asian giant has repeatedly urged Washington not to take sides in the escalating maritime dispute over the area, where it last year stepped up construction of artificial islands, provoking U.S. criticism and alarming neighbours.

"Outside countries, they are trying to militarize the region," Liu told Reuters.

With the disputed area becoming Asia's biggest potential military flashpoint, China and Southeast Asian nations have agreed to set up a foreign ministers' hotline to tackle emergencies in the East Vietnam Sea, a senior official of the ASEAN grouping said on Friday.

Liu said the hotline was a "useful" mechanism but that no guidelines on it had been outlined so far.

"You need rules for operation, so we are requesting an amended joint working group to formulate the guidelines," he said.