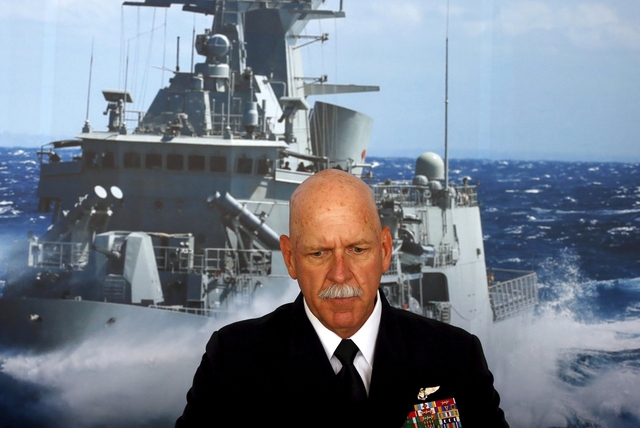 SYDNEY, Oct 6 - Some countries appear to view freedom of the seas as "up for grabs" in the East Vietnam Sea, imposing superfluous warnings and restrictions that threaten stability, a U.S. Navy commander said on Tuesday in comments apparently aimed at China.

Admiral Scott Swift, commander of the U.S. Pacific Fleet, said in a strongly worded address in Australia the United States remained "as committed as ever" to protect freedom of navigation through the region.

"It's my sense that some nations view freedom of the seas as up for grabs, as something that can be taken down and redefined by domestic law or by reinterpreting international law," Swift told a maritime conference in Sydney.

"Some nations continue to impose superfluous warnings and restrictions on freedom of the seas in their exclusive economic zones and claim territorial water rights that are inconsistent with (the United Nations Convention on the Law of the Sea). This trend is particularly egregious in contested waters."

China claims most of the East Vietnam Sea, through which $5 trillion in ship-borne trade passes every year. The Philippines, Vietnam, Malaysia, Taiwan and Brunei also have overlapping claims.

Japan and China also have conflicting claims in the East China Sea.

The United States has called for a halt to China's artificial island building in the area. China says it has irrefutable sovereignty over the sea and no hostile intent.

China has also accused the United States of militarizing the East Vietnam Sea by staging patrols and joint military drills.

The United States and China have blamed each other for dangerous moves during several recent incidents involving their aircraft and ships.

"Put simply, we will continue to exercise freedom of the seas for all nations, because we know from painful past experience, to shirk this responsibility and obligation, puts much more at risk than any one nation's maritime interests," Swift said.

China last month said it was "extremely concerned" about a suggestion by a top U.S. commander that U.S. ships and aircraft should challenge China's claims in the East Vietnam Sea by patrolling close to artificial islands it has built.