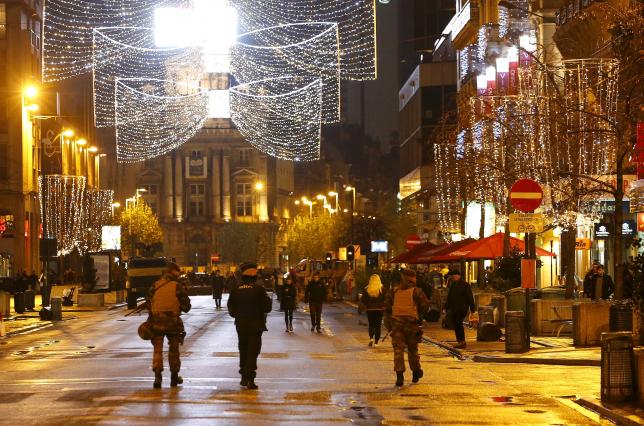 Soldiers patrolled the streets of Brussels and guarded European Union buildings on the third day of a security lockdown on Monday, as police hunted a suspected Islamist militant who has been on the run since this month's attacks in Paris.

Belgian national Salah Abdeslam has not been found despite 19 raids and 16 arrests overnight, and authorities are still warning of possible imminent attacks like those in the French capital, in which 130 people were killed. Belgian police fear he has returned home to launch new attacks.

The metro, museums and schools, many shops and cinemas will stay shut on Monday in the usually bustling EU capital where many staff will stay to work from home.

On the Grand Place, a historic central square that usually draws crowds of tourists and local people, an armoured military vehicle was parked under an illuminated Christmas tree.

NATO, which had raised its alert level since the Paris attacks of Nov. 13, said its headquarters in the city were open, but some staff had been asked to work from home and external visits had been cancelled. EU institutions were also open, albeit with the soldiers patrolling outside.

Prime Minister Charles Michel said the city of 1.2 million will remain on Belgium's fourth and highest level of security threat, meaning the threat of an attack was "serious and imminent".

"What we fear is an attack similar to the one in Paris, with several individuals who could possibly launch several attacks at the same time in multiple locations," he told a news conference.

Authorities were due to review the situation again on Monday afternoon.

Interior Minister Jan Jambon told RTL radio, however, that Belgium's capital was still operating. "Apart from the closed metro and schools, life goes on in Brussels, the public sector is open for business today, many companies are open," Jambon said on Monday morning.

The city's buses were running normally and many shops in the suburbs were open.

Germany has kept security along its border with Belgium at a high level since the Paris attacks, a German police spokesman said after media reports that Abdeslam was spotted near the frontier.

Several Belgian media carried unsourced reports saying he had been seen in a car near the eastern city of Liege heading towards Germany. There have been numerous reported sightings in recent days.

ING economist Philippe Ledent noted the biggest companies' business was international and therefore the global situation was more important to them. "For smaller companies active mostly in Belgium, they will have business in the rest of the country which is less affected," he said. "If this is limited in terms of days, in terms of area, it's not so much of a problem."

Belgium has been at the heart of investigations into the Paris attacks after French law enforcement bodies said two of the suicide bombers had lived there. Abdeslam, the main suspect, had returned home to Brussels from Paris shortly after the attacks.

Among those who decided to go out on Monday was Zineb Toubarhi, a business engineering student in Brussels, who was waiting to catch a bus on a frosty morning.

"I am going to my friends' place to look after their children today. They must go to work and the schools are closed. I've had classes cancelled at the university so I will help them," she said.

"It feels strange to see armed soldiers in the streets but this is for our security. So, I don't know why, but I am not afraid."