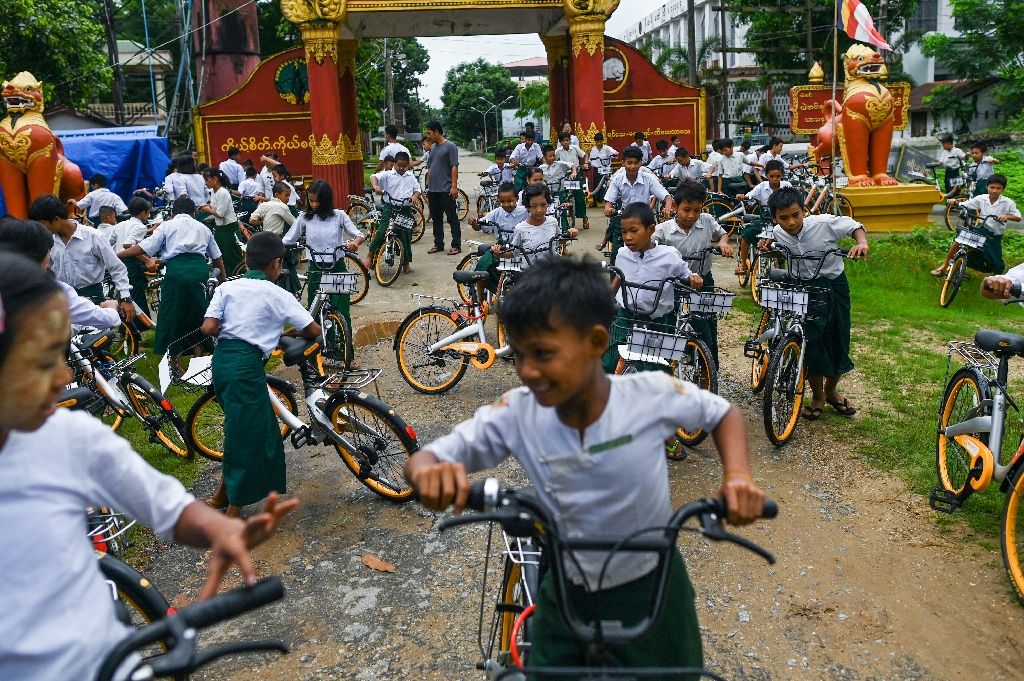 Ride on time: Recycled bikes get Myanmar kids to school

Yangon (Myanmar) -- The clangor of bells in the air, Myanmar children race home from school on recycled bikes shipped from Singapore and Malaysia, donated to give them easier access to education in a nation where more than half live in poverty.

Thae Su Wai will no longer need to trudge 10 kilometres (six miles) for two hours to and from lessons, she told AFP, beaming.

"I'll have more time to study and play with friends," she said, as she excitedly wheels away her new bicycle at Nhaw Kone Village school near Yangon.

The 11-year-old is among the first 200 students to receive bicycles as part of "Lesswalk", the brainchild of Mandalay entrepreneur Mike Than Tun Win.

He grew up and was educated in Singapore before returning home eight years ago with a business degree.

"I saw students walking for many hours to get to school and I felt really sorry for them," the 33-year-old told AFP.

UNICEF estimates 55 percent of children in Myanmar live in poverty, while half of 17-year-olds enter adulthood with little or no education.

So when Mike heard that bike-sharing companies oBike, Ofo and Mobike had pulled out from Singapore and Malaysia, leaving thousands of cycles in "graveyards", he grabbed his chance.

The tech investor bought up 10,000 bikes earlier this year and shipped them to Myanmar.

After exchanging the bike-share lock for a seat on the back, he is now starting to hand out the bright orange and yellow cycles.

He hopes they will help keep more kids in school for longer, giving them an education so they can "escape from poverty".

Each cycle cost him just $35, including shipping and distribution, and he footed half the bill, with the other half coming from sponsors.

Yangon is Lesswalk's first stop before Mike rolls out the scheme in Mandalay and Sagaing regions later this month.

Children aged 13-16 living more than two kilometres from school will be at the front of the queue.

"Many children don’t even have umbrellas -- they just use pieces of plastic to cover them when it rains."

Mike says this is just the start -- the aim is to keep up momentum and hand out a total of 100,000 bikes over five years.

"They might not be worth anything in Singapore, but they’re valuable in a poorer country,” he said.