The Nha nhac Hue (Hue royal music) troupe from the Theatre of Hue Traditional and Royal Arts is attending the annual Silla Cultural Festival held in Gyeongju city, South Korea from October 10 to 16.

“Silla Culture Festival is a chance to introduce our cultural values to the world, not only to audiences in Korea,” Outstanding Artist Tran Dai Dung, head of the 15-member delegation said.

“Nha nhac Hue” was performed from the Tran Dynasty of the 13th century to the Nguyen Dynasty, which ended in the early 20th century, at ceremonies including anniversaries and religious holidays, as well as special events such as coronations, funerals or official receptions, by highly trained and skilled court musicians.

In 2005, it was recognized by UNESCO as a Masterpiece of the Oral and Intangible Heritage of Humanity.

Every year since 1962, the Silla Cultural Festival has been held in October to celebrate and honor the country’s history and culture. The event which is one of the major festivals of Korea features athletic events, folk games, music, dance, literary contests and Buddhist religious ceremonies. 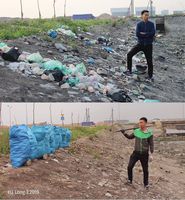