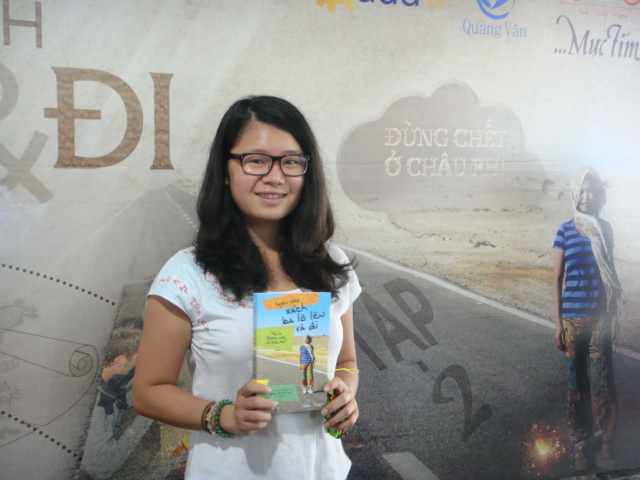 Publishers requested to work with backpacker on controversial book

The Publishing Department under the Ministry of Information and Communication said on Sept 27 that it has requested the two publishers which are in charge of Huyen Chip’s highly controversial travel book to answer about the book following a reader’s request to suspend it from publication.

“Dung Chet o Chau Phi” is the second part of Huyen’s series “Xach Ba Lo Len va Di” (Get your backpack and go), which depicts Huyen’s journey traveling across 25 countries with only US$700 to start with. The first part is “Chau A La Nha, Dung Khoc” (Asia is Home, Don’t Cry), which was released last year and also attracted considerable attention and mixed opinions.

The second part has caused even quite a greater stir on many forums, blogs, newswires and social networks soon after it was launched on Sept 22. While a number of fans have expressed their admiration for the young girl and her incredible boldness and adventuresomeness, many readers have raised serious doubts over the realness and reliability of Huyen’s personal accounts in the book, which she called her “travel diary”.

The Publishing Department recently received a 21-page letter from reader Tran Ngoc Thinh, who works as an independent counselor. Thinh urged that Huyen’s second book be suspended from circulation so that its content and the author’s ideology can be scrutinized.

Nguyen Anh Vu, director of Van hoc Publisher, promised that he will work closely with Huyen to seek satisfactory answers for the dubious details which the skeptical readers raised, including “recovering only three weeks from being hit by a car which was racing at 100km/hour” or “how much money Huyen spent a day during her journey”.

Many are also skeptical about Huyen’s capability of obtaining visas and jobs in 25 countries as easily as described in her book and how she lived with locals when she couldn’t speak the native language. Others even claimed that she had never even been to the countries and her book is mostly based on her pure imagination.

“We do respect the readers’ rights. They spent money on the book and thus deserve knowing the truth,” stressed Vu, who acknowledged that after reading Huyen’s draft, he had requested her to remove a number of details which are quite sensitive and deductive.