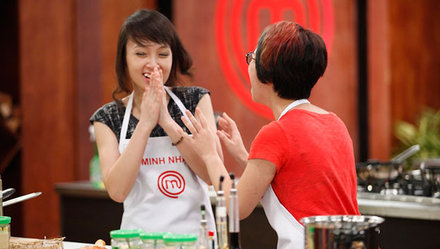 A 23-year-old girl beat her seasoned expat Vietnamese contender to be named winner of the second local season of the British cooking TV reality show Masterchef on Saturday night.

Hoang Minh Nhat, from Hanoi, defeated her strong contender, Le Chi, a Vietnamese Canadian, to win the title, a cash award of VND500 million (US$23,534) and an opportunity to publish her own cookery book.

During the 150-minute final challenge, Nhat conquered the jury and TV viewers with her French-styled three-course meal, including sauté goose liver and rabbit confit in juice sauce.

The youngest of the Top 12, the girl faced elimination a few times in the previous rounds.

Nhat graduated with flying colors from Hanoi Foreign Trade University and has a stable job at a foreign-owned bank.

She shared that the much-coveted title will allow her to professionally pursue cooking- her lifelong passion.

Late last month, Vietnam Television (VTV) admitted they made a mistake in not censoring footage of the beheading of a live turtle, so the disturbing image appeared clearly in the 10th episode of the second season of the MasterChef Vietnam cooking show, which was broadcast on September 20.

A male contestant had also accused the show organizer of unfairness and sloppy organization.