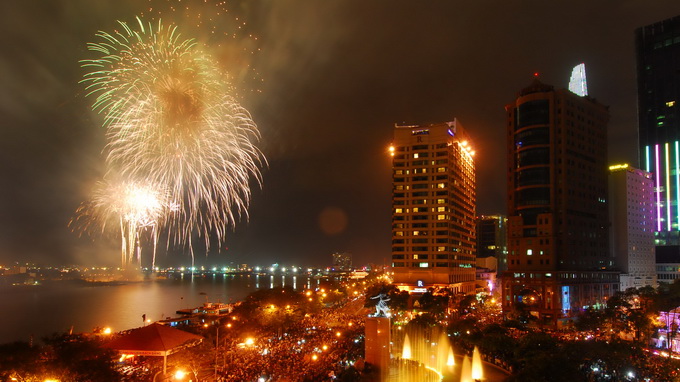 Ho Chi Minh City authorities are planning to organize pyrotechnic and light shows, estimated to cost US$1.5 million, at an iconic skyscraper in the downtown area on New Year’s Eve.

Le Ton Thanh, vice director of the local Department of Culture, Sports, and Tourism told Tuoi Tre (Youth) newspaper on Tuesday that the cost will be covered by sources mobilized from society.

The shows will be held at the city’s iconic Bitexco Financial Tower, a 68-story skyscraper at 45 Ngo Duc Ke Street, District 1, Thanh said.

A firework display will also be staged at Dam Sen Cultural Park at 3 Hoa Binh Street, District 11, he added.

The lighting systems will be on for 15 to 25 days.

Thanh also unveiled plans for pyrotechnic displays for Tet (Vietnam’s Lunar New Year) and the 40th anniversary of the country’s reunification on April 30.

Thanh said that the city will seek funding for the light and firework shows.

More firework displays may be held if the funding mobilization goes smoothly, he added.

Vice chairman of the city Hua Ngoc Thuan said during a meeting on Tuesday that the iconic Tet flower street will be relocated for the coming Lunar New Year.

The street has since grown into one of the city’s highlights during Tet – the Southeast Asian country’s largest traditional holiday – and receives millions of tourists, including foreigners, each year.

This year’s flower street, themed “Vietnamese Identity and Spirit,” will be moved to Ham Nghi Street in District 1, instead of its usual downtown venue, Nguyen Hue Street, vice chairman Thuan noted during the meeting.

The first day of the Lunar New Year falls on February 19.

Lam Quang Huy, from local tour operator Saigontourist, which organizes the flower street, said that this year’s exhibition will feature a section dedicated to seas and islands as a way to reiterate the country’s sovereignty over its seas and islands.

Office workers are expected to have holidays of four and nine days in celebration of the forthcoming New Year and Tet respectively.