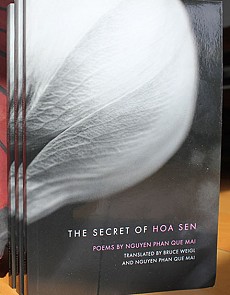 The event aimed to commemorate Vietnam’s 15th Poetry Day, which falls on the 15th day of the first month of Vietnamese Lunar New Year, and February 11 on the Gregorian calendar, the show organizers announced in a press release.

Throughout the show, Que Mai read her poems in Vietnamese, followed by English translations read by K. B. Kincer.

Vietnamese folksongs, songs, and music performed by Ngo Hong Quang, including “Biển”, a composition from Mai’s poetry, were also showcased.

The show organizer said it chose to feature Mai’s work because of the quality of her poetry, noting that her poems evoke the beauty of Vietnam and its people.

Que Mai also used the show as an opportunity to address the turbulent histories of both Vietnam and the United States.

“To be better citizens of America and the world, we believe it’s important to understand other cultures and there can be no better path to understanding a person’s culture than through their poetry”, Melodically Challenged said in the press release. “We hope our show embraces Americans of Vietnamese descent and celebrates Vietnamese people everywhere”.

“Our aim is to promote art work that has important educational and entertainment value for our audience,” Melodically Challenged added.

The poet has received grants, fellowships, scholarships and awards from Vietnamese and international organizations including the Hanoi Writers Association, Vietnam's Literature Newspaper, Hanoi Radio and Television, the Lannan Foundation, Lancaster University, the Prince Claus Fund for Culture and Development.

In their review of Que Mai’s The Secret of Hoa Sen, The Los Angeles Review of Books called her ‘one of Vietnam’s foremost contemporary poets.’