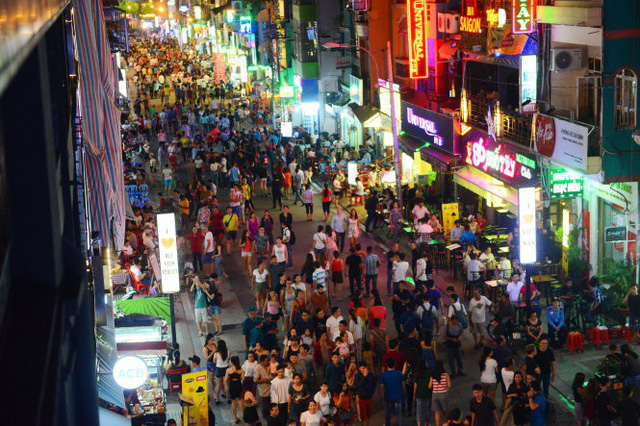 Authorities in Ho Chi Minh City will gather feedback from citizens on the establishment of two new pedestrian streets in the ‘backpacker area.’

During a meeting on urban management on Monday, the municipal People’s Committee called for the early collection of opinions from local residents regarding turning De Tham and Do Quang Dau into pedestrian-only streets.

A detailed report will be then submitted to the city’s Party Committee for approval.

It is expected that the two walking streets will be open during next year’s Lunar New Year holiday, which falls in mid-February.

De Tham and Do Quang Dau Streets are located in the ‘backpacker area’ of District 1.

The promenade stretches 850 meters from the intersection of Bui Vien with Tran Hung Dao-Nguyen Thai Hoc Streets, to Cong Quynh Street, which is open from 7:00 pm to 2:00 am on Saturday and Sunday.

During the meeting, leaders of district-level administrations were urged to establish specific plans on the use and management of local sidewalks.

Meanwhile, the municipal Department of Police was asked to work with relevant agencies to open a police command center in District 1, following a directive from the city’s Party Committee.