There is another Hoi An that is charming, peaceful, picturesque, and fascinating in these photos taken by a Vietnamese photographer when he visited this historic town this month.

Nestled along the central coast of Vietnam, Hoi An is an attraction to both domestic and foreign visitors.

The small town was recognized as a World Heritage Site by the UNESCO in 1999.

It is located downstream of the Thu Bon River in the coastal delta of Quang Nam Province, 30km south of the central hub of Da Nang.

The ensuing pictures were captured by Tran Bao Hoa, a photographer from the Central Highlands province of Dak Lak, as he visited the town in late December.

“I could not describe my feelings when I came to Hoi An then,” Hoa said.

“I have been there for many times but never have I seen it that fanciful.

“I just grabbed the camera and depicted a very beautiful and heavenlike town.”

Hoi An was unusually captivating against the moonlight at four in the morning, the photographer said, remarking it appeared miraculous amid the clouds at dawn while conjuring up a pang of nostalgia at dusk.

In 2019, Vietnam will celebrate the 20th anniversary of Hoi An being recognized as a World Heritage Site.

The local administration will organize an event to mark this milestone at the Ky Uc Hoi An stage, located in Cong Vien An Tuong Hoi An Park in Hoi An City, on December 31.

About 3,000 lanterns will be lit alongside a colorful fireworks display and a musical performance at the event.

Why not grab your bags and come to Hoi An?

To brace for this trend, enterprises must make investments to refresh themselves and improve their competitiveness 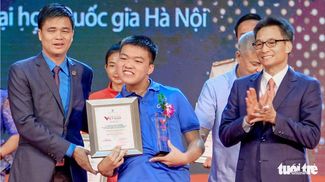 During his middle school years, Thuan was always ridiculed by his mischievous friends because of his neurological condition