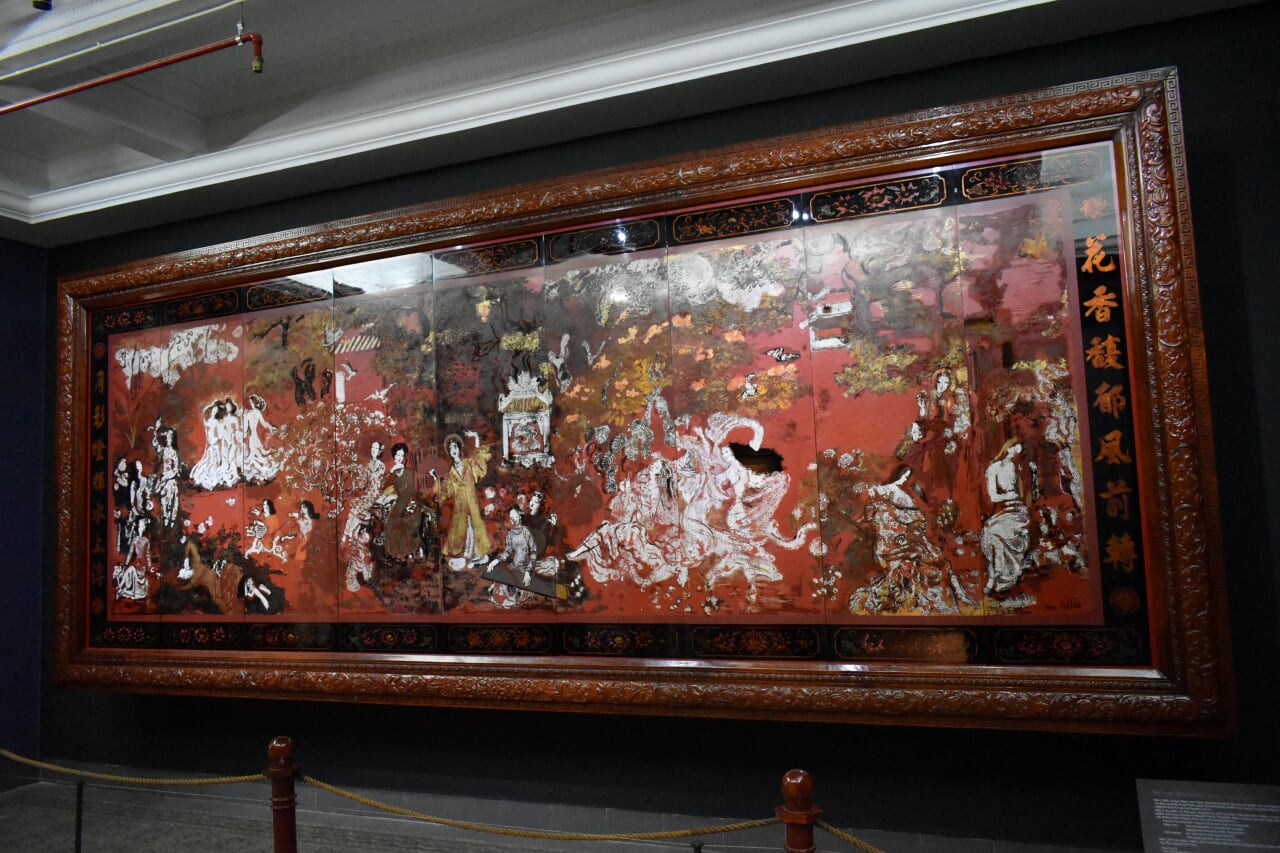 Dishwasher soap was used by an amateur to clean a lacquer painting by renowned Vietnamese painter Nguyen Gia Tri, irreversibly defacing the famed artwork that is considered a national treasure of Vietnam.

Vuon Xuan Trung Nam Bac (Spring Garden of the Central, South and North Regions) was the final major work of Nguyen Gia Tri, done over a period of 20 years between 1969 and 1989.

It is listed as a national treasure by the Department of Cultural Heritage for being the epitome of lacquer arts in Vietnam, done over the longest period of time by one of the leading pillars of Vietnamese contemporary arts.

However, the artwork looked noticeably different when it was put on display in February 2019 after being removed for a two-month scheduled cleaning beginning last December.

In photos of Vuon Xuan Trung Nam Bac before and after cleaning, it is clearly observable that the iconic gold color of the original painting has been washed out and replaced by white patches, making the art piece appear flat and shallow.

Siu Quy, vice-president of the Ho Chi Minh City Fine Arts Association, considers “70 percent of the painting’s essence” to have been lost in cleaning.

Nguyen Xuan Viet, one of Tri’s closest protégés during his final years, said the cleaning works not only damaged the painting in appearance but also “destroyed its artistic intent."

On Friday, an official report on the condition of the lacquer painting – the first since the incident broke out – was submitted the Department of Fine Arts, Photography and Exhibition (APE) to the Ministry of Culture, Sports and Tourism.

In the report, APE director Vi Kien Thanh said the Fine Arts Museum of Ho Chi Minh City – which is responsible for preserving and displaying the famed artwork – had entrusted an amateur lacquer artist with cleaning the painting.

The artist, Luu Minh P., used dishwasher soap, cinnabar powder and sandpaper during the cleaning process, which caused serious damages to the face of the painting, Thanh said in the report.

“[The process] destroyed the grace and subtlety typically found in Nguyen Gia Tri’s lacquer arts,” Thanh asserted, adding that up to 30 percent of the artwork’s “spirit, space, vibe and soul” had been lost.

Thanh proposed that the Fine Arts Museum come up with a thorough plan to restore the painting, employing help from Nguyen Xuan Viet and other renowned Vietnamese painters with profound knowledge of Tri’s works.

He also suggested that special treatment be given to the painting in terms of preservation, considering the fact that it is an officially recognized national treasure.

“Experience must be drawn” from this incident to prevent future carelessness in handling such treasured pieces of art, Thanh said.

Created during a transition from wartime to peacetime in Vietnam, the painting reflected Tri’s wish for peace in his country and happiness for his people.

At 540cm x 200cm, it is also the biggest lacquer painting ever done by a Vietnamese artist.

The painting was bought by the administration of Ho Chi Minh City for US$100,000 in 1991 and handed over to the municipal Museum of Fine Arts in District 1 for display and preservation.