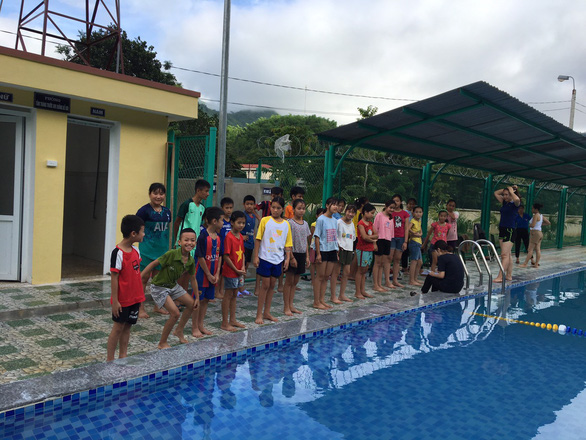 The Youth Union in a mountainous border district in the north-central province of Thanh Hoa launched last week a free-of-charge swimming course for local children.

Some 200 children came to the swimming class on its opening day on June 5, according to the Youth Union of Quan Son District.

The initiative is sponsored by the management board of a development project for the district that borders Laos.

The young learners, aged nine to 15, were divided into six different classes to learn swimming lessons in a standardized pool in the district’s Quan Son Town.

The children will be taught basic swimming techniques, first aid and necessary skills to avoid drowning, while learning how to recognize dangerous waters and how to rescue a drowning person.

Learners of the classes are also provided with free light meals during break time, and those living far away from Quan Son Town can take a complimentary shuttle bus to the swimming pool.

It is one of the main causes of death among children in the Southeast Asian country, claiming the lives of more than 2,000 kids a year in the 2015-2017 period, according to a 2018 report by the Ministry of Labor, War Invalids and Social Affairs.

A lack of swimming skills, poor supervision and natural disasters are to blame for the tragic figure.

Besides the swimming course, the Quan Son Youth Union also holds activities to teach children how to protect themselves from accidents or sexual assault, and how to spend their summer joyfully.