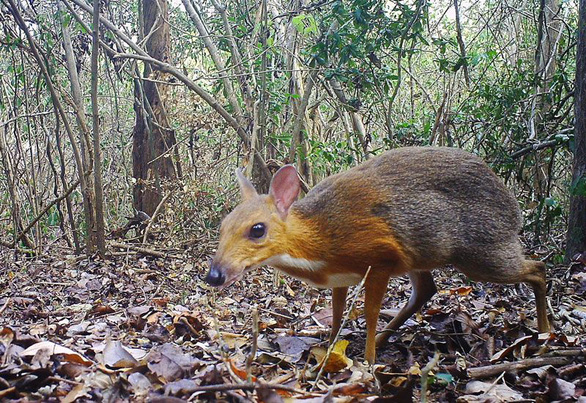 A two-tone mouse deer that has not been documented alive for three decades has been captured in footage tiptoeing through a Vietnamese forest in search of food.

The pictures of the rabbit-sized animal, also known as the silver-backed chevrotain, come to light thanks to camera traps set in a forest in Nha Trang, the capital city of the south-central province of Khanh Hoa, according to CNN.

The deer-like species is around the size of a rabbit, with a silver sheen, has not been found in the wild for nearly 30 years since the last confirmed sighting when a team of Vietnamese and Russian researchers obtained a dead chevrotain from a hunter.

“For so long, this species has seemingly only existed as part of our imagination,” said Vietnamese biologist An Nguyen, an associate conservation scientist with Global Wildlife Conservation (GWC), a non-governmental organization.

The shy and solitary creature weighing less than five kilograms was listed among the 25 “most wanted” lost species compiled by GWC.

Despite their nickname, chevrotains are neither mice nor deer, but the world's smallest ungulates or hoofed mammals, according to GWC.

The mouse deer was first described by scientists in 1910, when four specimens were collected around the beach city of Nha Trang, CNN reported.

After interviewing villagers and forest rangers near Nha Trang, An and his team set camera traps for five months in areas where the locals said they might have seen the animal.

The effort resulted in 275 photos of the mammal.

“We had no idea what to expect, so I was surprised and overjoyed when we checked the camera traps and saw photographs of a chevrotain with silver flanks,” CNN quoted An as saying.

The team then set up another 29 cameras in the same areas, this time recording 1,881 photographs of the chevrotain over five months.

“Discovering that it is, indeed, still out there is the first step in ensuring we don’t lose it again, and we’re moving quickly now to figure out how best to protect it,” the Vietnamese biologist told CNN.

However, the scientists could not specify how many individual mouse deer the photographs represent.

The rediscovery has increased calls for swift action to protect the silver-backed chevrotain as one of the highest mammal conservation priorities, as well as raising hopes that other species thought lost to science could yet be found in the wild.

Andrew Tilker, Asian Species officer at the GWC, warned that just because this species was found relatively easily, it does not mean it is not under threat.

“This might represent the last population or one of a handful of populations, in which case we need to take action immediately to put conservation measures in place to ensure its survival,” Tilker told CNN.