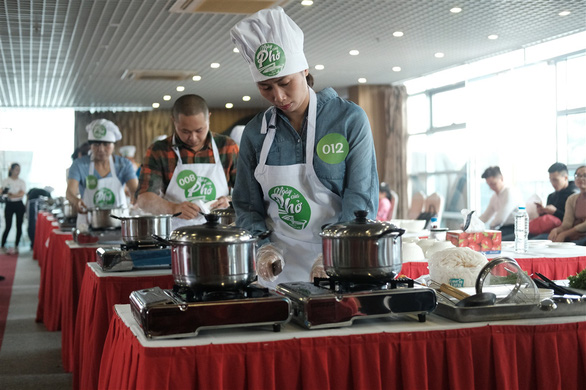 Three finalists representing northern Vietnam to compete in the final of a cooking contest searching for the best 'pho'chefs in Vietnam were decided at a qualification round held in Hanoi on Saturday morning.

The contest is one of the lead-ups to the 2019 Day of Pho, the third edition of an annual Tuoi Tre-backed program to honor the world-renowned food.

The phocooking competition was open to both local and foreign chefs who currently work at eateries, restaurants or hotels across the country, as well as non-professional cooks, with registration closed on October 31.

Contestants were provided with free toques, aprons and kichen utensils at the contest venue, and each given VND500,000 (US$21.5) in cash to buy ingredients for their pho.

After 1.5 hours, the judges rated the pho cooked by the contestants on a scale of 100 points, based dishes' taste and the presentation.

Competing chefs were also judged on their ingredient processing skills, creativity, hygiene, and a short presentation about their dishes.

Eventually, Nguyen Quang Huy, a Hanoi native living in France, Dang Ngoc Bich, a contestant from the northern province of Nam Dinh, and Trinh Duy Thanh, a Hanoian, got the highest scores to advance to the final of the competition, which will be held in Ho Chi Minh City on December 8.

“I have opened a pho restaurant in France, so I want to participate in the contest to learn and improve my skills,” Nguyen Quang Huy told Tuoi Tre (Youth) newspaper during Saturday’s qualifier.

Following the Hanoi event, a qualifier for the southern region will be organized in Ho Chi Minh City on November 23.

Finalists will also receive a certificate presented by the Vietnam Culinary Culture Association and a trophy.

December 12 was officially designated as the Day of Pho in celebration of Vietnam’s effective traditional dish in 2018, one year after the first ‘Pho Day,’ an initiative by Tuoi Tre, was held.

The third Day of Pho will be held on December 8 this year at White Palace on Pham Van Dong Street in Thu Duc District, Ho Chi Minh City, with support from Acecook Vietnam.

Besides the pho cooking competition, the Day of Pho 2019 also features a vote-based contest to choose the top ten pho brands most loved by consumers in Vietnam.

The favorite pho brands contest is now in its official voting round of 30 shortlisted brands that is open at ngaycuapho12thang12.tuoitre.vn/binh-chon-top-10 until November 31.

Winners of the contest will receive a certificate, a trophy and other gifts on the official festive day, December 8.