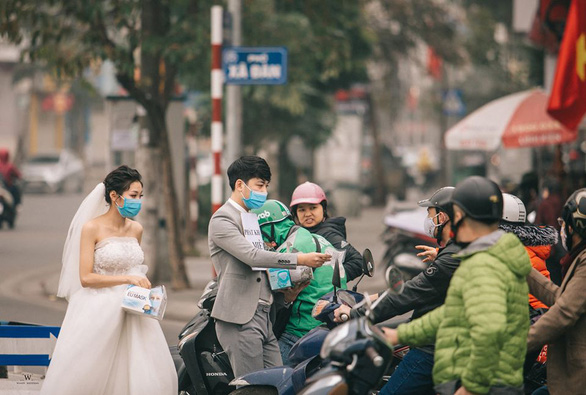 A pre-wedding photo album has gone viral on Facebook as it captures a Vietnamese couple handing out free face masks on the streets of Hanoi amidst a reported shortage of the medical supplies in Vietnam.

Instead of sunset on the beach or endless green grassland, Nghiem Dinh Dang, 26, and Pham Ngoc Vy, 25, who are getting married after one year of dating, have chosen the many streets in the Vietnamese capital city as the background for their pre-wedding photos.

In the photos, the couple is seen giving away medical masks to commuters and passers-by.

Bride-to-be Vy told Tuoi Tre (Youth) newspaper that ideas for the set of photos were conceived and realized in less than 12 hours.

The young couple said they had been alarmed by reports of 2019-nCoV and how the virus has caused demand for medical masks to hike in Vietnam, leading to a shortage.

The couple thus decided to buy more than 2,000 face masks for the giveaway and photoshoot, even agreeing to pay exorbitant prices.

“We feel happy and motivated thinking of the people who received our face masks,” the bride-to-be said.

Like Vy, Dang told Tuoi Tre he had had experienced different emotions throughout the outdoor photoshoot.

“The most memorable experience to me is the moment when an elderly uncle gave my bride a hug as he was very touched by what we did,” Dang said.

“We hope that our action can help spread some love during the battle against the [novel coronavirus] epidemic."

Dang and Vy’s pre-wedding photo album has been liked and shared thousands of times since it was uploaded on Facebook on Sunday, despite receiving mixed reactions.

Regardless of these comments, the couple told Tuoi Tre that they feel happy and love each other even more after the photoshoot as they believe what they did was meaningful work.

The novel coronavirus, which first surfaced in the Chinese city of Wuhan in December 2019, has killed 492 people and infected more than 24,500 globally as of Wednesday.

It has spread across China and to around two dozen other countries and regions.

Below are some photos from Dang and Vy’s pre-wedding photo album: