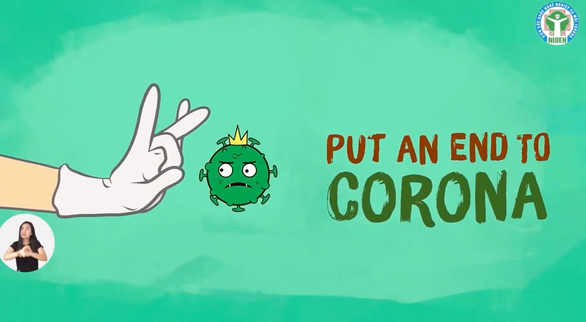 An English-lyrics version is now available for a viral Vietnamese song that took the world by storm last month with its catchy tunes and electrifying fan-made choreography educating listeners on good personal hygiene to fight novel coronavirus disease (COVID-19).

Health officials in Vietnam have teamed up with local creative talents to produce the English song and kick-start a project that urges hand-washing, social distancing and other best practices to combat COVID-19.

The official English music video for the parody song entitled Ghen Co Vy, whose lyrics had been rewritten in English from a popular Vietnamese pop song, was released on Thursday night on the verified YouTube channels of the National Institute of Occupational and Environmental Health (NIOEH) under the Ministry of Health, singers MIN and Erik, and fashionista Chau Bui.

Ghen Co Vy is a compound of the original song’s title ‘Ghen’ (Jealousy) and the Vietnamese pronunciation of ‘CoV,’ which is short for coronavirus.

The song's lyrics call on viewers to wash their hands thoroughly, not touch their faces, and avoid large crowds.

Together with the animated music video, the project ‘#EndCoV’ was also introduced on Thursday night, with influencer Chau Bui chosen as the ambassador for the campaign.

Chau Bui received praise last month for being cooperative during her quarantine in Ho Chi Minh City as a COVID-19 precaution while inspiring others to do the same.

The project will continue the #EndCoV Cover Challenge, which is a dance challenge that began popping up on TikTok, the hugely popular Chinese video platform, after Vietnamese dancer Quang Dang filmed himself dancing to Ghen Co Vy with self-choreographed moves in another viral video.

The dance, together with the song, even caught the attention of John Oliver, host of HBO's Last Week Tonight show, who introduced them in his popular American television program last month.

After hogging the limelight on the Last Week Tonight show, the Vietnamese music video was also featured on several international TV channels, including the BBC and CNN.

The unexpected popularity of the music video, which had been initially produced as a public service announcement to propagate best practices against COVID-19, prompted the production of the English version.

“We want to spread it even more broadly by calling on young people at home and abroad to perform the dance or sing the song [and upload videos of them doing so] on social networking sites like Facebook, TikTok, Instagram, YouTube, and Twitter,” said the NIOEH.

“The project is meant to raise awareness of the public as we all look forward to the end of [COVID-19] worldwide.”

Vietnam reported no new case of COVID-19 on Saturday morning, as the national tally still stands at 257. A total of 144 patients in the country have recovered.