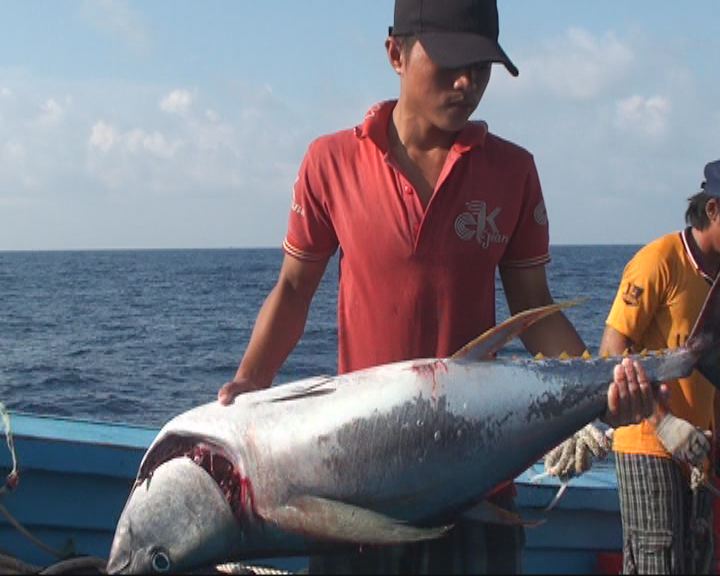 P3: A pleasure from the sea

The endless ocean and its treasures have always attracted mankind. Yet, to uncover and bring home these treasures - fish from dozens of meters under the sea and hundreds of miles off the coast, it takes the most dedicated fishermen tremendous efforts and sometimes, even their own lives. Over 20 days living at sea, we were given a chance to truly comprehend the hardship of the fishing profession as well as the profound love for their beloved country that burns within the heart of each and every seaman.

After 15 days wandering looking for fish, and then making sets, casting and pulling nets in both high hopes and patience, our result remains humble with only 7 tonnes of fish of mixed species.

Our gasoline is running low and so are our food supplies. We have already consumed all the vegetables and instant noodles we prepared. Fear of heavy loss from an unproductive trip soon starts to show on the weather-beaten faces of the crew members.

We keep on searching. This time, we haul in roughly 5 tonnes. Yet, the catch already costs us almost 1 tonne of bait fish. And on top of that, we are expected to share one third of our catch to the informing vessels which discovered the fish location. The distribution may either take place on the spot after the fish are freshly caught from the water or upon landing after the fish have been carefully preserved with ice. The informants only have to provide Captain Vuong with phone numbers or bank account information to get the money which is earned from selling the fish.

Perhaps, the only reward that saves the trip after those days wrestling with the hard-knock life at sea is the 10 giant tunas we catch. They are considered the most precious gifts that one could ever been given by the ocean. Each kilogram of tuna is worth $2.5 to $3. In other words, with these 10 tunas, the crew could easily generate an income of roughly $1,250.

Watching how these freshly caught tunas were processed right at sea for the first time is quite an experience. We have the impression that there is not much to gut.  Tunas seem to have quite a big and long intestine near their gills. A tuna's liver is also quite big and could have the size of a full spread of a grown man's hand. Its heart is especially notable and has the shape of an equilateral triangle.

For many people, the inside parts of a tuna make delectable dishes. And because it is very difficult to preserve them till the end of the trip, the privilege to enjoy them is hardly given to anyone except fishermen. Unlike farmers, fishermen always enjoy the best part of their catch. It is hard to put into words the taste of tuna intestine and the feeling of enjoying such a delicacy right at sea. What lingers after such an experience is a fine taste that penetrates the tip of our tongue and an aroma that provoke our senses.

Happy moments at sea never last so long. Time hangs heavy on our hands when our nets are empty. On those days, no matter how exhausted you are, you could hardly get your eyes shut.

The fishermen tend to come from many different backgrounds. The only thing they have in common is a family that relies solely on their income from fishing trips. Our vessel welcomes Nguyen Van Tong and his 30-year-old son Nguyen Van Hai as our crew members. Tong is the eldest fisherman onboard with over 35 years of experience on different boats and in different waters. The two work together to raise a family and pay the college tuition for Hai's younger brother (sister). At the end of the day, there is not much to save. And now, hai himself has just got married and is expected to to take care of his own family. This makes the financial burden on the old man's shoulders become even heavier.

Three weeks have passed and we begin to feel homesick. But it is in those moments of desperation, the ever-mysterious ocean shows its generosity with the gifts that it has been keeping to surprise those who are devoted to it. Being informed by a tuna fishing vessel nearby of the presence of a school of fish that could be attracted by light, the whole crew are revived. Captain Vuong speeds up the vessel, immediately heading it to what might be a worthy battle.

After spreading the nets around the fish school, all crew members and us forms up a line by the boat side preparing to pull in our catch.

Stretching our bodies pulling in the nets with all our strength, we feel the heavy weight of the catch which is, at the same time, resisting and pulling us back from the depth of the ocean. A power block with four-ton capacity has to be deployed to assist the us. Rounding the fish is one thing, but to haul them in is another. Without patience and control, the fish will get their perfect chance to penetrate the nets and thereby ruin the whole effort spent to trap them.

The sun starts to burn hot though it is still quite early. Captain Vuong then decides to to divide the haul into four to make it easier to pull in. After sealing the first compartment, two of our main divers, Đặng Văn Đô and Huỳnh Khánh Châu begin their job. Putting on their diving suits with a block of lead of 20 kilogram tied to the belt they dive to the blue water for over four hours to catch fish with their hand nets. One by one, bags of fish weighing around 500kg are pulled in and wash the deck with a blend of hundreds and thousands of striped tunas struggling between giant Californian tunas and mahi mahis.

After five hours, we have hauled in over 10 tons of fish which soon fill the deck to the gunwales. Too busy too cook, the twenty crew members of us chew up uncooked noodles while working our fingers to the bones from first light until dark just to be done with hauling in the second fish bag. Eventually, Captain Vuong has to call his brother, who captains the 49, to come to his aid from 20 nautical miles away. More ice for is transferred to our vessel altogether with the reinforcement of 10 men from the 49.

Under dim lighting, we find ourselves exhausted and hungry. It is about 4:00 am and after spending 24 hours working hand over fist, we are now done with hauling in the second compartment. Our effort is well compensated with up to 35 tons of fish - our record catch. Our happiness is multiplied and becomes meaningful when luck smiles on us when all seems lost. We give each other brotherly embraces as sea waves keep on consoling our vessel like a mother caressing her child.

Using up all the ice needed for preserving the fish, Captain Vuong decides to land his vessel at Hòn Rớ Port (Nha Trang City, Khánh Hòa) hoping to sell the fish at the best price when they are still fresh. The result surpasses our projection.  Even when 7 tons of bycatch is excluded from the total of 45 tons caught throughout the trip, at the $1.65/kg, our sales could reach over 69 grand. What remains after deducting all operating costs is roughly 35 grand, half of which will be enjoyed by ship owners. The rest will be distributed to the crew of 18 members. This means each can easily rake in at least $750 to $900 at least.

Throughout 23 days floating and living in the middle of the endless ocean, we have worked side by side with fishermen who we consider friends and brothers. They give us a precious opportunity to taste the harship of fishing as well as the sweetness that authentic labour brings. Only those who have once experienced life at sea with these fishermen can understand the fatality that lurks in the profession, the power of hope rising after all dangers are gone, the yearning for being home that burns inside for a few days just to be subdued by the overwhelming desire to return to the big blue ocean.

Our friends leave port once again, marking the sea with our National Flag and hoping for another fruitful trip. Their role now is not only to come back safely with plenty of fish but also to be the living milestones that mark and guard the border of Vietnam in the Pacific Ocean.

Huynh Thi Kim Dung, a resident of Ho Chi Minh City's Go Vap District, has spent tens of thousands of dollars purchasing and rearing seven Sphynx cats due to her unending affection for the specialty breed.

After over a decade of construction, Hanoi’s Cat Linh–Ha Dong elevated railway, the first of its kind in Vietnam, has welcomed passengers as it began commercial operation on November 6, 2021.