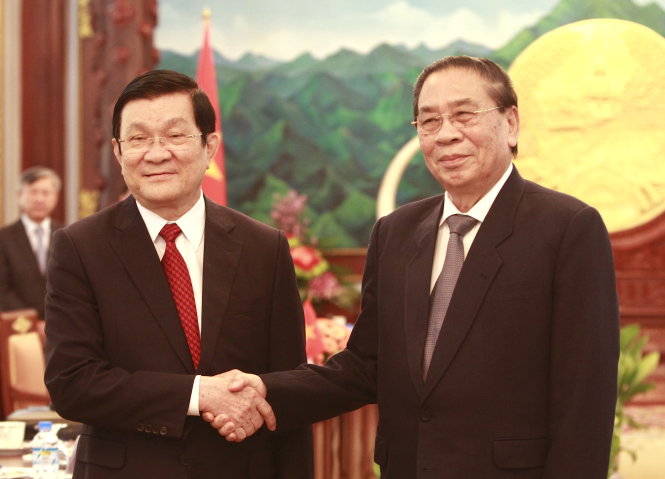 Vietnam, Laos agree to give highest priority to each other

Visiting Vietnamese President Truong Tan Sang and his Lao counterpart have agreed to offer top priority to each other in order to further promote the traditional friendship and comprehensive cooperation between the two countries.

>> Vietnam-Laos border marker planting to be completed this year: officials The agreement was made at a meeting in Vientiane on Monday between President Sang and President Choummaly Sayasone, who is also General Secretary of the Lao People’s Revolutionary Party. President Sang thanked his host for a warm welcome and expressed his delight at the achievements gained by the Party, Government and people of Laos under the leadership of Party General Secretary Sayasone. The two leaders affirmed that their countries will try their best to strengthen their traditional friendly relations and special solidarity, considering them vital to the success of the revolutionary cause of each country. The two presidents pledged to facilitate all-level visit exchanges, strengthen cooperation in defense and security, effectively realize agreements reached at the 37th meeting of the Vietnam-Laos Inter-Governmental Committee, and promptly issue policies to facilitate cooperation in trade and investment between the two nations. Both sides consented to complete a project to increase and upgrade border markers before the end of 2015 in celebration of the 85th founding anniversary of the Communist Party of Vietnam. Regarding trade ties, the two leaders were delighted at the growth in two-way trade, which reached US$1.4 billion in 2014, up 24.5 percent from 2013. Currently, Vietnam is the largest investor in Laos with 413 registered projects worth more than $5 billion. The Lao president said his counterpart’s visit will contribute to lifting the bilateral relationship to a new height. He also lauded Vietnam’s achievements in its nation building and protection. Both host and guest also discussed regional and global issues of mutual concern, including the maintenance of peace and stability in the East Vietnam Sea and the sustainable use of water resources of the Mekong River. The two presidents expressed their pleasure at the support the two countries have given to each other at international and regional forums, including the United Nations, the Association of Southeast Asian Nations (ASEAN), the ASEAN Inter-Parliamentary Assembly, the Asia-Europe Meeting, and others.

The Vietnamese president told his host that his country will support Laos in its role as the ASEAN chair in 2016.