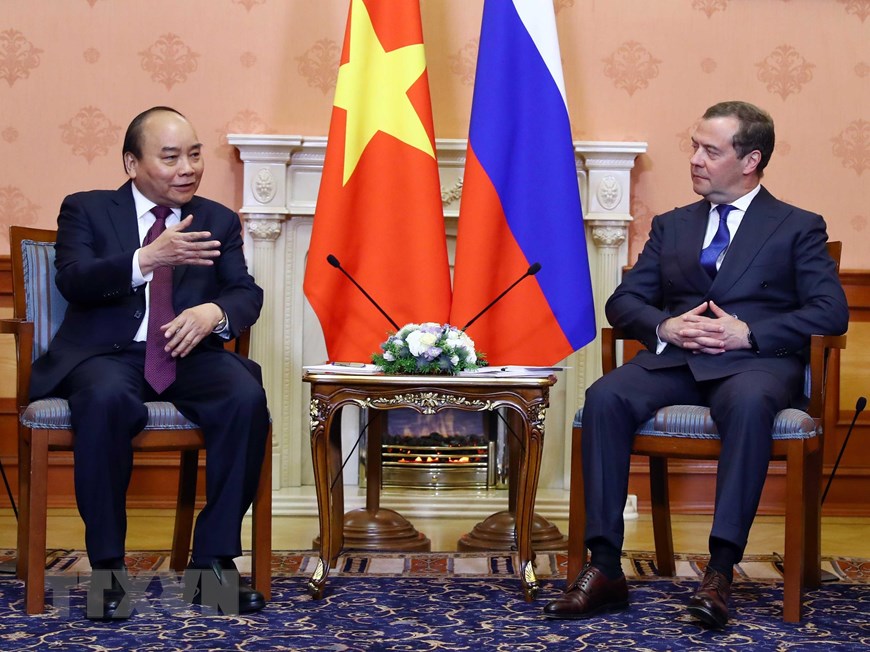 The two leaders joined talks in Moscow on Wednesday afternoon (local time), as part of PM Phuc’s official visit from May 20 to 23.

They expressed their delight at the trade partnership that has been growing strongly, dynamically, and stably over the past years.

Both sides discussed many measures to promote cooperation, especially in economic ties, trade and investment.

The two countries will step up collaboration in energy, industrial production, and food production, while creating favorable conditions for oil and gas cooperation between local businesses.

PM Medvedev highlighted traditional connections between Vietnam and Russia, adding that more than 600,000 Russian tourists have visited the Southeast Asian nation, and over 50,000 Vietnamese students have studied in Russia.

Replying to his host, Phuc affirmed Vietnam’s focus on cementing its comprehensive strategic partnership with Russia.

He also underlined the determination to develop bilateral relations in a result-oriented and sustainable manner in all fields, thus benefiting both nations.

Both sides consented on the maintenance of peace and stability, and the solution of disputes via amicable measures in the Asia-Pacific region, including the East Vietnam Sea.

Vietnam hopes that Russia would further contribute to the preservation of regional and global peace, security, and stability, PM Phuc said.

Following their talks, the two premiers witnessed the signing of 14 cooperation documents between ministries, sectors, localities, and businesses of Vietnam and Russia.

Within the framework of his visit, the Vietnamese head of government also convened a meeting with Russian President Vladimir Putin in Moscow on the same day.

During their conversation, President Putin believed that PM Phuc’s visit would create a positive impetus for the two countries’ relationship to thrive.