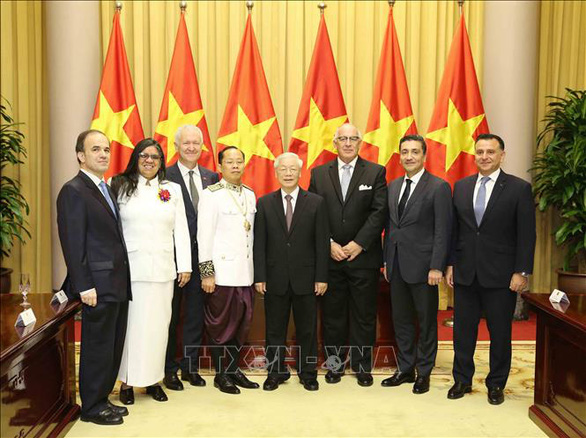 General Secretary of the Communist Party of Vietnam and State President Nguyen Phu Trong hosted a reception for receiving letters of credence from the ambassadors of seven countries in Hanoi on Thursday.

The reception took place at the Presidential Palace, with the participation of Party General Secretary and State President Trong and ambassadors from Cambodia, Switzerland, Venezuela, Greece, Luxembourg, Paraguay, and Jordan.

This reception was a memorable milestone in the relations between Vietnam and the respective countries, as well as the ambassadors themselves, President Trong said, adding that the diplomats are performing their duties at a time when Vietnam is scheduled to host many important events in 2020.

Vietnam’s achievements in socio-economic development, defense, security, and more can be attributed partly to support from the international community and the ambassadors’ countries, he said.

General Secretary Trong expressed his belief in the important roles of the ambassadors as the ‘bridges’ to connect Vietnam and their respective countries.

The ties between Vietnam and such countries will surely thrive in the future, he added.

He underlined that Vietnam always creates favorable conditions for the ambassadors to fulfil their duties in the Southeast Asian nation, helping cement the relationships between Vietnam and their countries and the world at large.