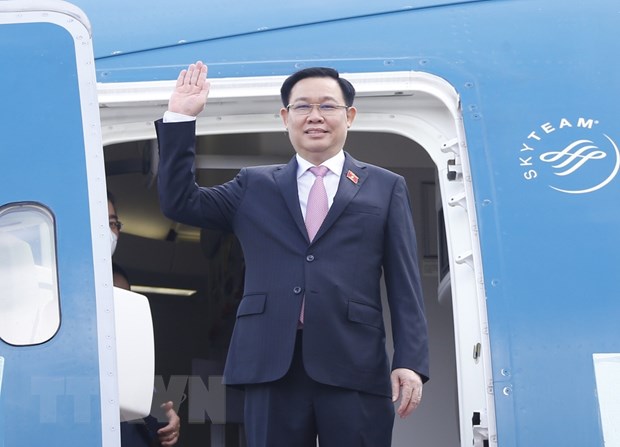 Vietnamese parliament leader sets off for visits to RoK, India

Chairman of the Vietnamese National Assembly (NA) Vuong Dinh Hue and his entourage left Hanoi on Sunday morning for official visits to the Republic of Korea (RoK) and India from December 12 to 19.

Chairman Hue is accompanied by Deputy Prime Minister Le Minh Khai, Secretary General of the NA and Head of the NA Office Bui Van Cuong, Chairman of the NA Committee for External Relations Vu Hai Ha, and other NA officials and ministers.

The visits are aimed at consolidating and promoting relations between Vietnam and the RoK and India, opening a new and more substantive and effective cooperation chapter.

The Vietnam-RoK strategic partnership has made strong progress in recent years, and the two countries are actively preparing to celebrate 30 years of their diplomatic relations next year.

Despite the negative impacts of the ongoing COVID-19 pandemic, bilateral trade in 2020 was equal to the level recorded before the health crisis, and is on the path to recovery this year.

The upcoming official visit by Chairman Hue is viewed as an opportunity to lift the countries’ strategic cooperative partnership to a new height, toward bringing two-way trade to US$100 billion.

The RoK is Vietnam’s third-largest trading partner, with their trade reaching $66 billion, or 12.85 percent of the Southeast Asian country's total trade with the world.

The East Asian country is also the fourth-biggest export market of Vietnam, with the latter raking in an export revenue of nearly $19.1 billion last year.

Vietnam and the RoK are working together in the implementation of the RoK’s New Southern Policy and cooperation programs in the framework of the Association of Southeast Asian Nations (ASEAN), Vietnamese Ambassador to the RoK Nguyen Vu Tung told the Vietnam News Agency in a recent interview.

Their bilateral defense-security cooperation has become a strategic and important pillar, as they are looking to celebrate the 50th anniversary of the establishment of diplomatic relations next year.

India has affirmed ASEAN’s central role in the Indo-Pacific Initiative and identified Vietnam as a pillar of its ‘Act East’ policy.

The South Asian country is among the top 10 trading partners of Vietnam, with two-way trade increasing steadily.

At a teleconference last month with Vietnamese Deputy Minister of Foreign Affairs Nguyen Quoc Dung, Secretary of the Ministry of External Affairs of India Riva Ganguly Das expressed her satisfaction that bilateral trade turnover remained at a positive level, hitting $10.68 billion in 2020 and nearing $11 billion in the first 10 months of 2021, Lao Dong (Labor) newspaper reported.

The trip will run from Wednesday to Saturday

Vietnam, New Zealand to raise trade turnover to $2bn by 2024