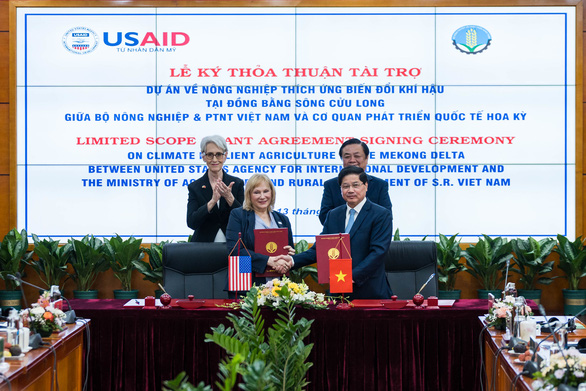 Two cooperation agreements totaling US$65 million that will help reduce greenhouse gas emissions in agricultural production in Vietnam’s Mekong Delta region and improve its fight against illegal wildlife trafficking have been signed during U.S. Deputy Secretary of State Wendy Sherman's visit to the Southeast Asian country.

Among these, the ‘Limited Scope Grant Agreement,' focusing on climate change response in the Mekong Delta for the 2022-27 period, was signed in Hanoi on Monday between USAID Vietnam director Ann Marie Yastishock and Le Quoc Doanh, Deputy Minister of Agriculture and Rural Development.

The signing was observed by Minister Le Minh Hoan and Deputy Secretary Sherman, who arrived in Vietnam on Friday last week for a four-day working visit at the invitation of Vietnam’s Foreign Minister Bui Thanh Son.

Through this project, with an estimated budget of up to $50 million, the USAID will assist the agriculture ministry in reducing methane emissions from the agriculture sector, building resilience for the Mekong Delta’s vulnerable communities, promoting nature-based solutions, and developing climate-resilient and low-emissions policies.

“I commend both agencies for working together to help the people of the Mekong Delta region adapt to the changing climate and reduce agricultural emissions,” the U.S. Embassy in Vietnam quoted Deputy Secretary Sherman as saying in a press release the same day.

She emphasized that addressing the climate crisis must be a collective effort and requires incorporating everything from building environmental resilience to reducing emissions and conserving biodiversity.

The American diplomat also witnessed the signing of another agreement between the two agencies to help Vietnam control the increasingly serious wildlife trafficking situation.

The $15 million five-year project, called ‘Saving Threatened Wildlife,’ will work toward increasing Vietnam’s leadership in addressing wildlife crime by enhancing the commitment of the Vietnamese government’s leaders at the national and provincial levels, improving law enforcement effectiveness, and reducing demand and consumption of illegal wildlife products.

“At current rates, experts predict that the world’s most iconic endangered species, including rhinos, elephants, pangolins, and tigers, will perish from the planet within the next decades,” the embassy cited USAID Vietnam director Yastishock.

The two sides will work through this new project to shrink demand for and consumption of illegal wildlife products, and save threatened species, Yastishock said.

“The United States is proud to be Vietnam’s partner in this effort,” she stated.

Deputy Minister Doanh commented that the effective implementation of this project will help address the issue of illegal wildlife trafficking, thereby contributing to biodiversity conservation and environmental protection in Vietnam and reflecting the highest commitments of the government of Vietnam in this effort.

On the same day, Deputy Secretary Sherman also told the press in Hanoi that the U.S. government will provide an additional $19 million for post-war unexploded ordnance clearance in Vietnam.

Cooperation between the U.S. and Vietnam in dealing with the war aftermath is an important endeavor, in which the former has offered more than $185 million for such operations in the latter since 1993, the diplomat said.

After their normalization of diplomatic relations in 1995, Vietnam and the U.S. promoted their ties to comprehensive partnership in 2013.

Their bilateral ties have since continued developing well in all fields.

In the 2020-21 period, despite the COVID-19 pandemic, the U.S. remained the biggest importer of Vietnam while Vietnam has emerged as the ninth-largest trade partner of the U.S., according to the General Department of Vietnam Customs.