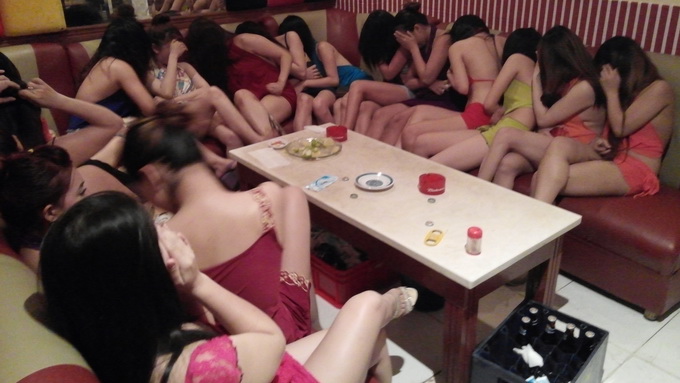 >> Police bust sex barber’s for foreigners in Ho Chi Minh City Acting on a tip-off from the public, the police inspected the 151 Restaurant on Le Hong Phong Street in Ward 3 at 7:15 pm Sunday and caught it violating many regulations. Tran Van Tam, 56, the manager of the restaurant, failed to show inspectors a karaoke license although three of the restaurant’s five karaoke rooms were operating at the time of inspection, said Colonel Le Phuoc Truong, the district’s chief police officer who led the raid. Female attendants in scanty clothes were caught performing erotic dances on the table in each of the five rooms where male guests were drinking. Specifically, in room No. 3 on the second floor, five young women were caught performing lap dances for three men who are overseas Vietnamese. Of the 24 female attendants who were at the restaurant at the time of inspection, twelve had no work contracts or health check-up certificates. The police made a report about eight violations committed by the restaurant. The restaurant has been fined before. Earlier on May 15, a HCMC joint inspection team inspected and fined it VND82 million (US$3,900), for violations including operating karaoke service without a license. However, the restaurant’s owner, 27-year-old Tran Thanh Sang, has yet to pay the fine so far.