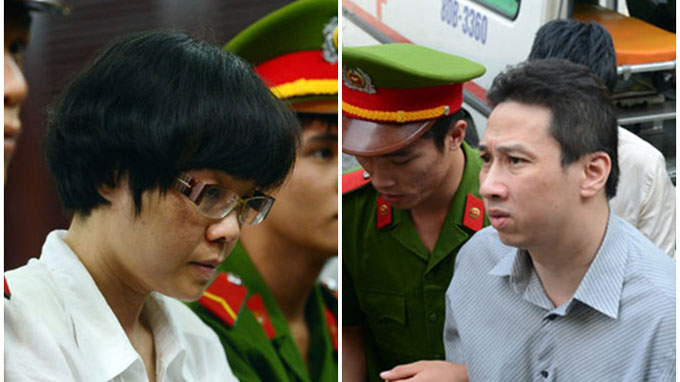 At the ongoing trial for a 36-year-old woman who is a former official at Vietinbank and her 22 accomplices, the prosecutor has proposed that she be given a life sentence and that two other bankers be indicted for irresponsibility.

>> Young ex-banker who swindled $188.7 mln faces life>> $188 mln swindle case by bank staff now on trial >> 23 indicted in $188 mln swindling case at Vietinbank The woman, Huynh Thi Huyen Nhu, former deputy head of the Risk Management Department of the Vietnam Joint Stock Commercial Bank for Industry and Trade (Vietinbank), is being tried by the Ho Chi Minh City People’s Court along with the 22 accomplices involved in a striking swindle case in which they appropriated nearly VND4 trillion (US$188.7 million) from many individuals and banks. Nhu, who was arrested on September 30, 2011, is charged with “swindling to appropriate assets” and “counterfeiting seals and materials of agencies and organizations.” On Monday, the prosecutor in court proposed that Nhu and Vo Anh Tuan, ex-vice director of Vietinbank’s Nha Be branch, be sentenced to life, while requesting that the other 21 defendants be given sentences from nine months to 21 years in jail. According to the indictment, after getting loans totaling more than VND200 billion ($9.43 million) from many banks, organizations, and individuals at high interest rates to invest in real estate and later failing to repay the debts, Nhu, under the false pretext of mobilizing capital for two Vietinbank branches, obtained loans totaling VND4,911 billion ($231.65 million) from three individuals, nine companies, and three banks from March 2010 until September 2011. After using more than VND925 billion of this sum to repay her previous loans and the interest incurred to four of her creditors, Nhu appropriated the remaining amount, investigators said.

In the process to obtain the loans, Nhu, with support of her accomplices, forged nearly 200 documents, including 110 false contracts between Vietinbank’s Nha Be Branch and businesses.Irresponsibility charges Also in court yesterday, the prosecutor proposed that two more officials at Vietinbank be prosecuted for being irresponsible and causing serious consequences. The persons in question are Nguyen Thi Minh Huong, deputy director of Vietinbank’s HCMC Branch, and Truong Minh Hoang, Huong’s deputy. The two officials signed a number of credit contracts with staff of ACB and Navibank, but they failed to supervise the implementation of these contracts, enabling Nhu to appropriate money from the two banks. The prosecutor also proposed that central proceeding agencies consider criminal responsibilities of Vu Hong Hanh, ex-director of Phuong Dong Securities Company. According to the prosecutor, Hanh signed seven payment orders to create conditions for Nhu to appropriate hundreds of billions of dong. Hanh deliberately signed the orders although she knew that the signing was unlawful, the prosecutor said. The prosecutor also requested that the State Bank of Vietnam improve its control and supervision over Vietinbank’s operations. The hearing continues today, January 14.