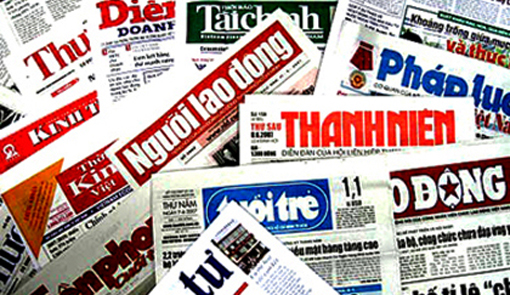 Tuoi Tre News briefs you on some of the leading news stories published Tuesday (March 24) in Tuoi Tre (Youth) newspaper:

-- Vietnamese State President Truong Tan Sang had a talk with his Lao counterpart Choummaly Sayasone yesterday during his visit to Laos, expressing the support of Vietnam for its neighbor to take over the chairmanship of ASEAN in 2016.

-- The Ho Chi Minh City Department of Planning and Architecture has suggested in its urban plan that five new bridges should be built to connect District 2 and Thu Duc District to Thanh Da Peninsula, which is 426 hectares in area with a population of 45,000 people.

-- The Ho Chi Minh City Department of Health announced yesterday it will launch an inspection program at 170 hospitals and medical centers in the city in May, June, and November.

-- The transport industry will merge all of its newspapers and magazines into just one newspaper, Giao Thong (Traffic), and one magazine, starting April 1.

-- The 315km section of National Highway 1 from Thanh Hoa to Ha Tinh Province in the central region has subsided after being put into operation for two months. The section cost VND5.5 trillion (US$255.8 million).

-- The former deputy director of the Ho Chi Minh City branch of the Vietnam Bank for Agriculture and Rural Development, Vu Ngoc Kinh, and two other officials of the bank have been arrested for allegedly violating regulations on granting loans and flouting State regulations on economic management, causing severe consequences.

-- The Party Committee of Hanoi has suggested that relevant agencies review the responsibility of officials in a controversial plan to chop down 6,700 trees in Hanoi from 2015 to 2017. About 500 trees have already been felled.

-- The Vietnam Rivers Network has proposed that authorities of the southern province of Dong Nai stop reclaiming 8.4 hectares of land from the Dong Nai River to develop a construction project.

-- Transport Minister Dinh La Thang has suggested that the central government sell Phu Quoc Airport on Phu Quoc Island off the Mekong Delta province of Kien Giang to raise funds for the construction of Long Thanh International Airport in the southern province of Dong Nai.

-- A fall in the number of international tourists to Vietnam in 2014 has been blamed on the lack of attractive travel products, ineffective advertising, and complicated visa application procedures.

-- The Mekong Development Bank has been merged with Maritime Bank, which now has VND113 trillion ($5.26 billion) in assets.

-- French corporation Aeroports de Paris has said it will coordinate with Credit Suisse, the Transport Ministry of Vietnam, and the Airports Corporation of Vietnam to raise $2.5-3 billion for the construction of Long Thanh International Airport in the southern province of Dong Nai.

-- The Japan International Cooperation Agency has suggested that authorities in the Central Highlands province of Lam Dong build a high-tech agricultural and industrial zone with processing factories for exporting to Japan.