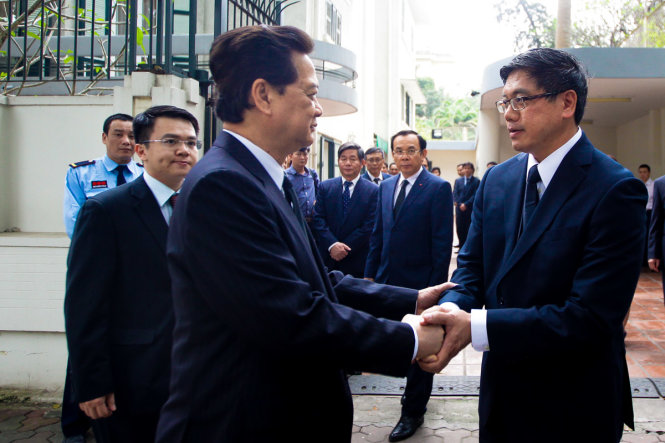 Vietnamese leaders, including Prime Minister Nguyen Tan Dung, have given their condolences over the death of Singapore’s founding father Lee Kuan Yew, who died at 91 on Monday.

>> Modern Singapore's founding father, Lee Kuan Yew, dies at 91 At 1:00 pm (Vietnam time) yesterday, Prime Minister Dung and Minister of Planning and Investment Bui Quang Vinh led a delegation to the home of Singaporean Ambassador Ng Teck Hean, at 2A Chu Van An Street in Ba Dinh District, Hanoi to pay tribute to late former Singaporean Prime Minister Lee. A service for paying respects and writing messages in a condolence book over the passing of the Singaporean leader began Monday and will last until Friday, March 27. Lee died at Singapore General Hospital, where he had been admitted on February 5, at 3:18 am local time, after suffering from pneumonia, according to Reuters.

Minister Vinh, who is chairman of the Vietnam-Singapore Economic Connection Committee, also sent his condolences to Ambassador Ng. “With great regret over the death of former Singaporean Prime Minister Lee Kuan Yew, the founder and developer of Singapore, who is also a great friend of the government and people of Vietnam,” he wrote in the condolence book. “I would like to share with the country and the people of Singapore this big loss. Lee Kuan Yew was a great and sincere friend of the government and people of Vietnam. His departure is also a loss to Vietnam,” Minister Vinh told the ambassador.

The ambassadors of Indonesia, Brunei, Palestine, Venezuela and others, as well as Singaporean citizens living and working in Vietnam, also arrived at Ambassador Ng’s house to express their condolences over Lee’s death. Also on Monday, General Secretary of the Communist Party of Vietnam Nguyen Phu Trong sent condolences to Secretary-General of the People’s Action Party Lee Hsien Loong – who is also the Singaporean Prime Minister – while State President Truong Tan Sang conveyed his sympathy to President Tony Tan Keng Yam.

PM Dung also passed his condolences to the Singaporean prime minister over the loss on Monday. The same day saw Vietnam’s Deputy PM and Foreign Minister Pham Binh Minh express his sympathy to Singaporean Foreign Minister K. Shanmugam. Lee was the founding prime minister of Singapore and father of the current premier, Lee Hsien Loong. He was Singapore’s prime minister from 1959 to 1990 and has been widely credited with turning Singapore into one of the most affluent economies in Asia within three decades. PM Lee Hsien Loong has declared a period of national mourning over his father’s death from March 23 to 29, according to a statement from the Singaporean Prime Minister's Office. As a mark of respect to the late leader, the state flags on all government buildings in Singapore will be flown at half-mast from Monday to Sunday, the office added.