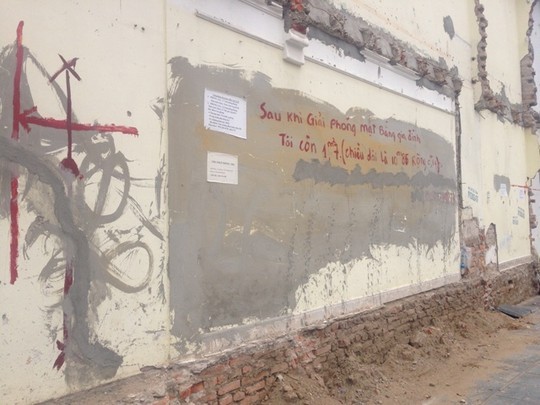 When his street-front house was entirely destroyed as part of a site clearance task launched by Hanoi authorities, Nguyen Phuong Cham made an exceptional move with the remaining land plot, which measures less than two square meters.

Cham, residing in Cau Giay District, is selling the 1.5-square-meter land plot, which is 10.86 meters long and only 0.14 meters wide, on Nguyen Van Huyen Street for VND1 billion, or roughly US$46,000.

The man is in fact seeking buyers for a wall, measuring the same area of the land piece and which bears handwritten text saying this is “all that is left” after his house was cleared, plus a mobile phone number for contact.

While it does not sound logical to pay $46,000 for a wall, or a piece of land that is not even big enough to grow a tree, locals believe Cham has a reason to do so, according to Zing News.

Should the wall be pulled down, the house behind it will become a street-front one, which means more value and more business chances for the house owner, they said.

Cham did not conceal the fact that it was his intention to ask such a hefty price for the wall.

“Once someone buys my wall and it becomes a street-front house, the value of the land plot will soar,” he told newswire Dan Viet.

Cham said his price is in fact much cheaper than it should be.

“That house behind the wall will never be able to find buyers, but as a street-front house the entire land plot would be priced at VND350 million [$16,077] a square meter,” he said.

Cham told Zing News that his sale of the wall is in accordance with the law.

But it is not likely that his plan will go a long way.

“Where can we get billions of dong to buy that?” Hoi, who lives with the family of her sister in the house, told Zing News.

Hoi said her sister is leading a hard life after her husband died.

Nguyen Minh Tuyen, chairman of Quan Hoa Ward, where the wall sits, said Cham and the owner of the house behind his wall must reach an agreement on selling the land plot, or merge the two pieces as per construction law.

If Hoi’s sister cannot afford it, the ward administration “cannot do anything to help,” Tuyen admitted.

“The best-case scenario is that some rich man appears and buys both the wall and the land plot behind it."