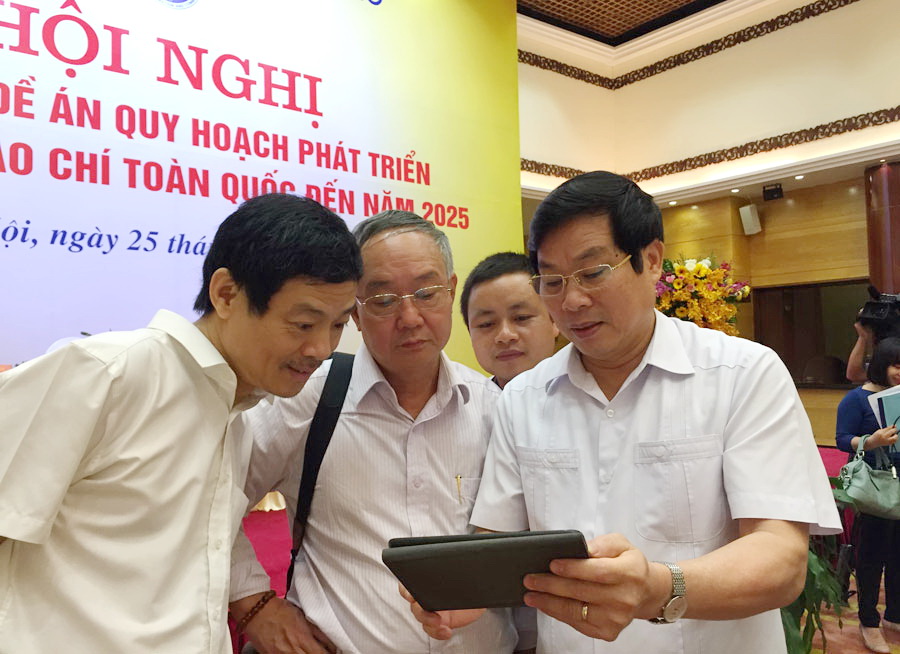 Vietnam is likely to see fewer print newspapers but more online ones, while influential media outlets such as Tuoi Tre (Youth) newspaper will be put under a higher management level, according to a recently announced proposal.

The proposition on national press management and planning towards 2025, prepared by the Ministry of Information and Communications, was introduced at a conference chaired by Minister Nguyen Bac Son in Hanoi on Friday.

The new planning of the press industry is aimed at improving the efficiency of press management and leadership, the Vietnam News Agency quoted Deputy Minister of Information and Communications Truong Minh Tuan as saying.

It also addresses the overlapping investment and loose management of the media, and enhancing capacity for media managers as well as journalists, according to the deputy minister.

The Ministry of Information and Communications will consider creating some specific mechanisms to avoid putting negative impacts on journalists, reporters, editors and workers at press agencies in the implementation of the planning, according to Son.

Tuoi Tre, which has influence not only in Ho Chi Minh City, where it is headquartered, but the whole country, and other influential newspapers may expect changes regarding the entities that oversee them, the minister noted.

Tuoi Tre is now managed by the Ho Chi Minh City Communist Youth Union, an agency of municipal department level but which is in fact not entitled to run a press agency under current regulations, according to the minister.

“Such a contradictory issue must be considered during the project,” he underlined.

One of the possible solutions is to put these influential newspapers under management of agencies with higher authority levels, the minister said, adding that this will help facilitate both the development and management of these newspapers.

In the case of Tuoi Tre, the higher authority levels could be the Ho Chi Minh City’s Party Committee, People’s Committee or a central-level agency, Deputy Minister Tuan told Tuoi Tre in an interview.

All of the current publications of newspaper agencies in Ho Chi Minh City will be put under management of a single competent agency, he added.

If the planning is accepted, Vietnam will have fewer print and more electronic newspapers, according to the Vietnam News Agency.

The proposal urges print newspapers to shift to electronic versions, and electronic newspapers run by organizations and agencies below ministerial and provincial levels will be put under the management of ministries and provinces, the news agency said.

Meanwhile, social organizations and state-owned enterprises are unlikely to issue electronic newspapers but rather electronic magazines.

Each centrally-run city or province has one print newspaper agency

According to the planning project, every centrally-run city or province will have a print newspaper agency that will be managed by their Party Committees, or by ministerial-level or central-level agencies.

Meanwhile, municipal or provincial departments will have no print newspaper agency.

The central-level agencies of religious organizations operating legally in Vietnam are entitled to have a print magazine agency.

Only 30% foreign contributions to be allowed in TV programs

As part of the planning project, radio and television stations are being asked to air 70 percent domestically-produced programs and only 30 percent foreign contributions while the number of foreign channels is not to exceed 30 percent, Deputy Minister Tuan said.

However, the broadcast and TV stations in Hanoi and Ho Chi Minh City will each have two broadcast channels and two TV ones, he added.

Regarding Pay TV systems, the number of foreign channels is not allowed to exceed 30 percent of the total number of channels of a Pay TV system, the deputy minister said.

Under the project, the planning of print newspapers will firstly be conducted in 2017 in a number of press agencies and in some localities on a trial basis, before a wider implementation until 2020, according to Minister Son.

Newspapers that have both print and online versions will be re-arranged as per the same schedule, whereas electronic newspaper agencies must be rearranged prior to 2017.

On October 1, the ministry will work with Ho Chi Minh City authorities on the re-arrangement of city-based press agencies and will consider the future status of many newspapers of the city.

The ministry will later work with other localities and ministries, sectors and associations, Minister Son said.

He emphasized that the project will be carried out prudently and step by step under a specific roadmap in order to minimizing impacts it may have on reporters, editors and workers at press agencies, he added.