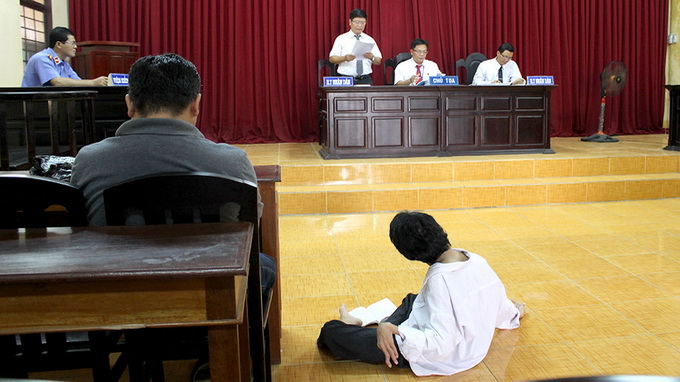 Six siblings in the Mekong Delta province of Kien Giang took their handicapped brother to court on Friday last week, claiming their deceased mother’s will unfairly favored the man.

The sight that met the judge in the courtroom of the People’s Court of Chau Thanh District in Kien Giang last Friday afternoon was of a defendant unable to take a seat on his bench but rather sitting on the floor with deformed, shaking hands and feet.

The plaintiffs were his six older siblings, who were bringing him and another sibling to court to dispute their deceased mother’s will, which handed over all of her real estate to the youngest, handicapped child.

Pham Thanh Tung, the 34-year-old handicapped defendant, was a victim of Agent Orange, a herbicide and defoliant used by the U.S. military during the American war in Vietnam that has left as many as one million Vietnamese disable or with other health problems, according to estimations by the Vietnamese Red Cross.

Tung’s father Pham Van Tranh died in 1987, while his mother Hoang Thi Hue passed away in 2011.

Tung himself has lost 85 percent of his health since birth due to Agent Orange-related disabilities.

Hue and Tranh had eight children, four sons and four daughters, none of whom have suffered from any disability, with the exception of Tung

Since Tranh’s early death, the couple’s properties had been under the legal possession of Hue, who divided their land into seven allotments for her seven able-bodied children prior to her death, in addition to a sawmill and a motorbike for the two eldest sons and a separate riverside piece of land for Tung.

The rest of her real estate, including a farm and a private graveyard, have been left in her will to Tung and his nearest brother Pham Van Son, assigned to be Tung’s care-taker.

After Hue died, the two oldest brothers Pham Van Truyen, 47, and Pham Van Luan, 43, demanded that their mother’s will be canceled and her properties be divided evenly among the siblings.

According to Tung, Luan had twice attempted to assault him at his house in 2014, making him too afraid to stay and forcing him to move to a rented house with his brother Son. The house their mother left to Tung and Son is now occupied by Luan.

Tung and Son were summoned by the Chau Thanh District Court later that year as the defendants in an inheritance dispute lawsuit filed against them by Truyen and Luan, who also represented the four sisters in court.

In their lawsuit, the plaintiffs demanded that their mother’s will and land gifted to Tung be canceled and that all properties be divided evenly among the children, claiming that the mother’s division was unfair.

At a previous court session on April 29, 2016, representatives from the People’s Committee of Chau Thanh District confirmed that all relevant papers, including Hue’s will and her land donation contract, were legal and therefore would not be subject to cancelation.

After a week of deliberation, last Friday the court rejected all requests made by the plaintiffs, acknowledging Tung and Son’s legal possession of the properties left to them by their mother.

“I have been living with exhaustion and confusion for the past two years. Since I can’t move around by myself, Son has had to carry me every time I need to go to the toilet. Since the lawsuit was filed, renters have terminated their rental contracts, while Son and I have had to move out because the house our mother left us has been occupied by Luan,” Tung said after the ruling.

Tuoi Tre (Youth) newspaper reporters came to Tung and Son’s rented house in Chau Thanh District on Sunday, two days after the court ruled in favor of the brothers on the inheritance dispute.

“I’m glad that the court came out with a reasonable ruling, but on the inside I’m really hurt!” Tung confessed.

“When the dispute first broke out, I told Luan that I had never wanted to fight with them over the house. I told him that I could sell the house and give them the money if they really needed it,” Tung said. “But Luan said he would sue me, and that he didn’t need to wait for me to give it to him.”

Pointing to a prize pennant hanging on the wall that read “First Prize – 1999 Youth Chinese Chess Championship of Rach Gia Town,” Tung said proudly that it was his “trophy.”

“It was Luan,” Tung said when asked who had taught him to play chess.

“Though I learned the advanced moves myself later, the first person that taught me to play chess was Luan,” Tung answered sadly.