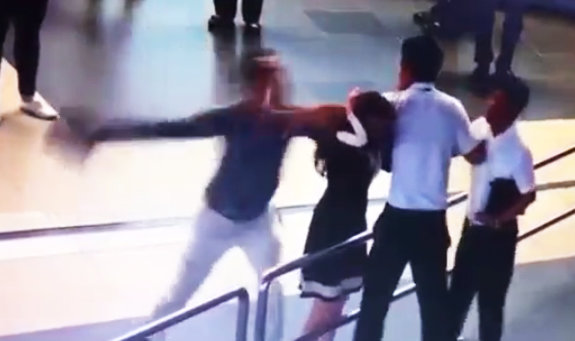 Two passengers caught beating up a female employee on camera at the Hanoi airport earlier this week have been banned from flying for six and twelve months.

Tran Duong Tung, 32, and Dao Vinh Thuan, 37, have been banned from flight for 12 and six months, respectively, after assaulting Nguyen Le Quynh Anh at the Noi Bai International Airport in the Vietnamese capital on Tuesday afternoon, the Civil Aviation Authority of Vietnam (CAAV) said on Thursday.

The authority has ordered that domestic and international carriers to refrain from servicing the two passengers during their prohibition periods, beginning on October 21.

The decision was issued following a working session between competent authorities and relevant individuals on Thursday morning.

A press release regarding the incident was also announced by the CAAV later the same day.

Tung and Thuan had been scheduled to board Vietnam Airlines flight VN7265 from Hanoi to Ho Chi Minh City at 1:35 pm on Tuesday when they missed their flights after arriving late to the boarding gate.

According to Vietnam Airlines regulations passengers are required to be at the gate 15 minutes before their flight.

The two passengers arrived at 1:59 pm and were not allowed to board the aircraft.

Anh, a Vietnam Airlines airport service deputy, and her colleague, Ta Duc Giang, approached the two men, attempting to help them reschedule for another flight, but were met with extreme anger and aggression.

The issue quickly escalated when Tung hit Anh several times on her head with his wallet while Thuan restrained her by grabbing her shirt.

The female employee suffered soft-tissue injuries and was admitted to a local hospital for a health check.

“The two passengers’ actions were violent, illegal, and in need of stern sanctioning,” the CAAV asserted.

According to the Northern Airports Authority, the case has been officially reported and the offenders were transferred to the Noi Bai airport police unit for further administrative penalties.

The prime minister also ordered that results of the investigation be submitted to him office by the end of October.

The municipal Department of Transport confirmed that Thuan was an inspector of the agency.