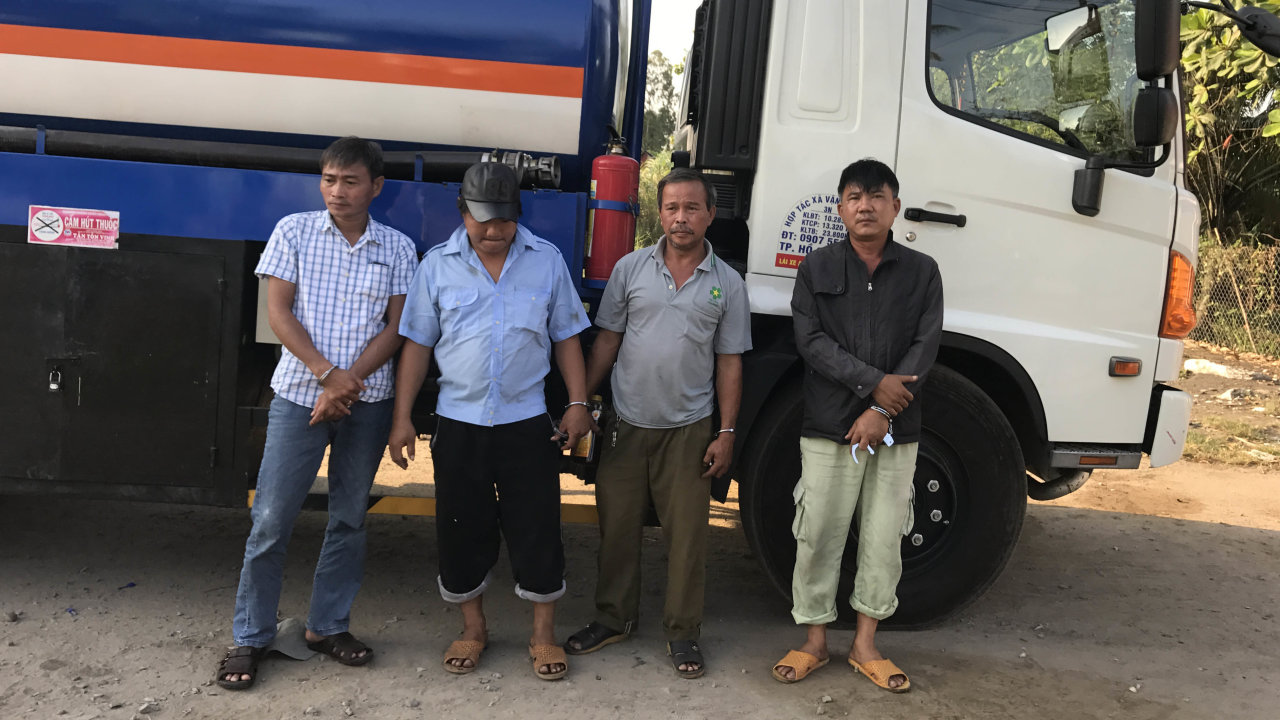 Police on Thursday cracked down on a ring responsible for the theft of huge amounts of oil and gas in Ho Chi Minh City.

Officers from the Ministry of Public Security caught suspects from the group red-handed as they were stealing fuel near the My Thuy Roundabout in District 2.

Four members of the gang were extracting petrol from a tanker when the officers carried out a surprise raid.

Police caught the group with several 30-liter gas cans, some of which were already filled and awaiting transport to their rendezvous point.

The duo was stealing the fuel for purchase by a man named Binh while Dung, a ‘veteran’ in the gasoline black market, was in charge of transporting the products to Binh.

According to suspect statements, the thieves’ illicit operations would often begin with Suong and Quy driving their tanker truck to a pre-arranged, often safeguarded, location.

Once the truck was in place, several members would work together to loot as much of the gasoline, usually airplane fuel, as possible.

Following Thursday’s arrest, officers carried out inspections at other locations in District 7, Nha Be District, and other neighborhoods in a sting operation directed at several other suspects involved in the ring.

A probe by Tuoi Tre (Youth) newspaper showed that oil and gas theft, particularly aircraft engine fuel, has been an aching problem in Ho Chi Minh City for quite some time.

Although crime rings are often busted by police officers, the criminals are still able to reorganize the oil-theft business using increasingly subtle methods.

Extracting the oil from tankers often takes place near the Cat Lai oil and gas depot in District 2 and various locations in District 7 and Nha Be District.

The stolen fuel is then transported to distribution hubs in District 7, District 8, and District 2, before being distributed to buyers.

The petrol being looted is typically en route from the depot to Tan Son Nhat International Airport in the southern city, the Mekong Delta city of Can Tho, or the Central Highlands, a source close to Tuoi Tre said, adding that the ring members are capable of steal up to 10,000 liters a day.

Members of the local oil and gas crime rings are mainly ex-convicts willing to use the threat of force on those who interfere with their operations.

Police also suspect involvement from those in charge of checking the fuel delivery at their listed destinations, considering they seem to have overlooked the violations.