After delivering paint to a military unit at Tan Son Nhat International Airport in Ho Chi Minh City on Thursday, a courier decided to take a shortcut through the airport’s restricted zone on his way out, local newspaper Nguoi Lao Dong reported.

Footage of the renegade delivery man was posted to Facebook on Thursday, but has since been removed by the uploader.

Local newspaper Nguoi Lao Dong confirmed from an unnamed source that the incident did in fact occur, asserting that authorities were considering it a serious breach of aviation safety regulations.

According to the source, the man had been hired by a military unit stationed inside the airport to deliver paint for a renovation project.

The shipper, driving a motorbike, had been escorted into the airport by members of the unit, but was left unattended for his return trip.

He then decided to take a shortcut through the airport apron in the civil section of Tan Son Nhat before being stopped by security forces. 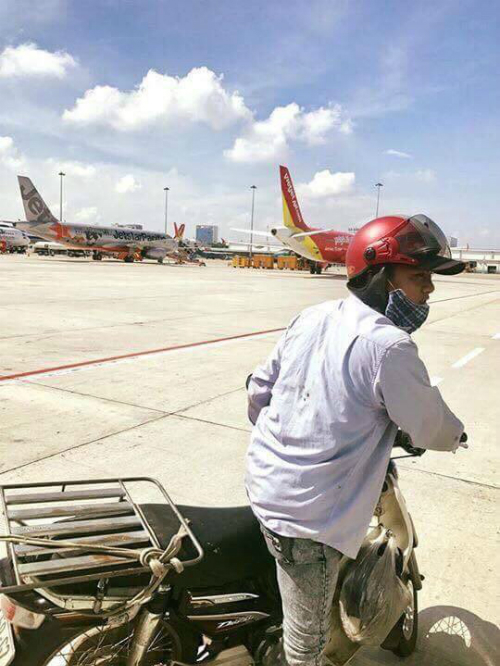 A still photo taken from the footage of the paint delivery man driving in the the airport apron at Tan Son Nhat Airport in Ho Chi Minh City, May 18, 2017.

Tan Son Nhat airport is used for both civil and military purposes, and the airport apron is where aircrafts are parked, loaded and loaded, refueled, and boarded.

Only those with special authorization are granted access to the area and the fact that a motorbike was able to roam freely through the apron is very rare, the source said.

Airport management has transferred the case file to relevant authorities for further investigation.

Space bubbles are frothing up business at a New York bistro, offering fresh air in safe capsules on sidewalks for customers on guard against the coronavirus

If confirmed by the Senate, Barrett would replace Justice Ruth Bader Ginsburg, a liberal icon who died at age 87 on Sept. 18

27 people had been on board the plane

The good news from the survey is that 90.6 percent of the children play at least one sport