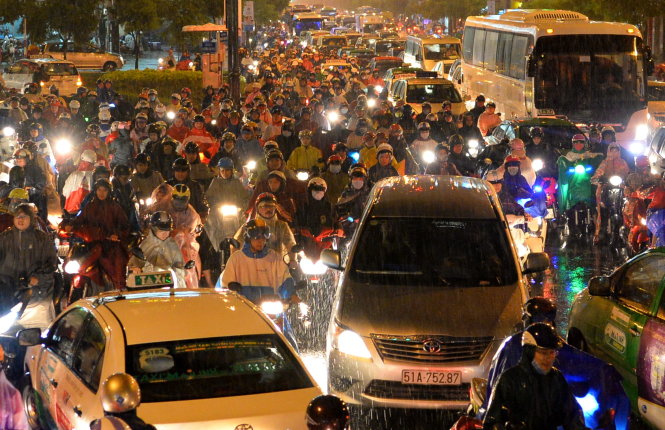 At a meeting with the Ho Chi Minh City’s transport department on Friday, the Institute of Transport Science and Technology introduced as many as four different solutions for the monorail proposition, all expected to cost a few dozen million U.S. dollars to build.

The elevated monorail could start from either Gia Dinh Park in Go Vap District or Hoang Van Thu Park in Tan Binh District to the airport.

The monorail stations to be built at the parks will also feature an underground parking lot, capable of receiving 2,000 cars, and other amenities.

A control center and a depot for the monorail car are proposed to be built at Gia Dinh Park. Truong Son Street is effectively the only way for passengers to reach the overloading Tan Son Nhat and therefore suffers heavy congestion on a regular basis.

Commenting on those proposals, Ha Ngoc Truong, deputy chairman of the Ho Chi Minh City’s road and port association, said the project is unlikely to work as a metro line is already planned to connect Hoang Van Thu Park with the airport.

Truong added that the estimated costs for the monorail, ranging from $35-50 million, are too high, given the average cost of only $24 million.

Other experts expressed concern that the monorail stations would only increase the change of gridlock at Gia Dinh and Hoang Van Thu parks. Hoang Van Thu, located next to the frequently congested Lang Cha Ca intersection, is already a hotspot for traffic jam.