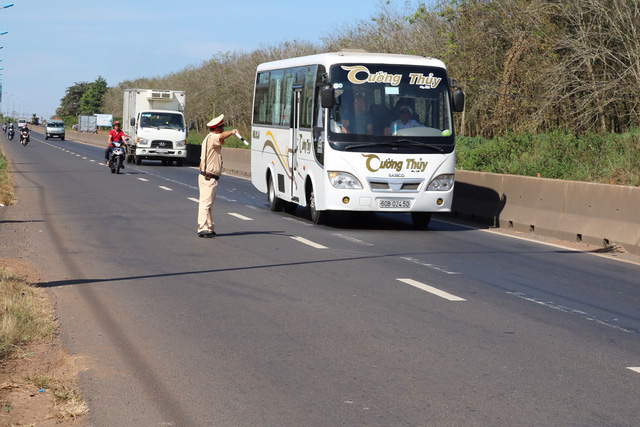 Vietnamese authorities have kick-started a nationwide inspection of trucks and passenger buses in a bid to prevent serious accidents involving these types of vehicles.

The examination will be conducted in three different phases, from January 14 to 20, from January 21 to 30, and from February 11 to 20, according to the traffic police division under the Ministry of Public Security.

Officers will perform the task along local expressways, National Highway 1, and other national highways based on the suggestion of traffic police in each locality.

The inspection targets coaches and passenger buses with eight seats and above, trucks weighing five metric tons and over, semi-trailer trucks, and tanker trucks.

Traffic police officers are authorized to pull over such vehicles to check whether the drivers have sufficient documents, namely a vehicle registration certificate, driver’s license, certificate of technical safety and environmental protection inspection, insurance of civil liability of the vehicle owner, as well as other related paperwork such as a permit for transporting dangerous goods.

They will also penalize those who driver under the influence of alcohol and drugs, carry too many passengers, transport illegal products, or break any traffic regulations.

The effort is aimed at preventing and dealing with serious traffic violations, thus minimizing road crashes across the country.

In related news, the traffic police division in Ho Chi Minh City has initiated a large-scale patrol to deal with road users, including motorcyclists and car, truck, and bus drivers who consume alcohol and other types of stimulants on duty.

Officers are scheduled to carry out the patrol between 6:00 pm and 2:00 am every day from January 15 to February 15, in a bid to ensure traffic safety during the Lunar New Year holiday.