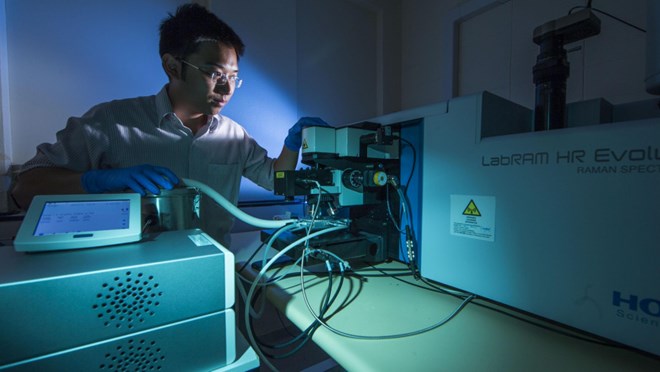 A Vietnamese fellow and researcher at the Australian National University (ANU) has lead-authored a research that creates a breakthrough tool to help semiconductor manufacturers spot defects during their production.

“Faulty mobile phones and solar cells could soon be a thing of the past thanks to a ground-breaking invention developed at the ANU,” the Canberra-based national research university said in a statement of the tool developed by a team led by Vietnamese national Nguyen Trong Hieu.

The research paper has been published in Advanced Energy Materials, according to ANU.

The invention helps manufacturers spot defects or unwanted features in everyday technology—such as mobile phones, batteries and solar cells—more easily and much earlier in the fabrication process.

It works by capturing high-resolution images of semiconductor materials, including many potential defects, within seconds, according to the lead author Dr. Hieu.

"We're calling it 'the miracle of speed and space',” the ANU statement quoted the Vietnamese researcher as saying.

“It's not just several times faster than techniques currently being used—it's tens of thousands of times faster."

Hieu, from the ANU Research School of Electrical, Energy and Materials Engineering, added that the ground-breaking he helped develop “opens the door to a new generation of ultra-high resolution, precise characterisation and defect-detection tools for both research and industry sectors."

The ANU researchers, in collaboration with scientists from the National Renewable Energy Laboratory in the U.S., discovered the light emitted from various semiconductor materials, including silicon, perovskites and many thin films, had some very distinct qualities.

Once this light is captured on camera, according to Hieu, the optical images can be used to gather important information about how the material works.

"Now we know much more about the property of the light—and, just from the image, we can extract different information with incredible depth," he said.

"The beautiful part of this research is that we used ordinary tools that are commercially available, and converted them into something extraordinary."

Born in 1988, Hieu received his PhD in engineering (photovoltaics) from the ANU in 2016, according to the Vietnam News Agency.

In 2017, he was a visiting scientist at the U.S-based National Renewable Energy Laboratory.

In the research paper, Hieu and his colleagues demonstrated their method by capturing images of the optical bandgap, one of the first pieces of information researchers need to know about a material, according to the lead author.

This bandgap determines many properties of semiconductors, including the ability to absorb light and conduct electricity.

"We tested this invention extensively on various state-of-the-art perovskite solar cells made here at ANU and independently confirmed the results with many other low-speed or low-resolution techniques. They matched perfectly," he said.

"We are refining the invention so that it can be commercialized."

Prior to this invention, it took an entire week to get a high-quality bandgap image on a device; now it takes just a few seconds to get an image with the same quality, according to co-author Boyi Chen from ANU.

"This invention will help to produce more robust mobile phones, solar cells, sensors and other optical devices as it can spot defects very early in the fabrication process,” Chen said.