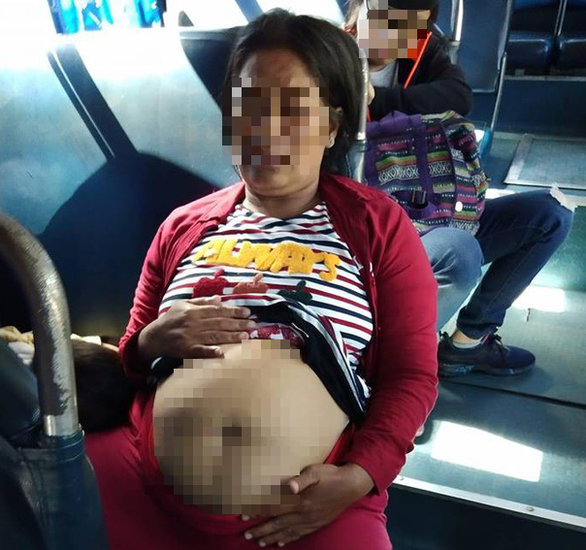 A woman has pretended to be pregnant and tricked people on a bus in Ho Chi Minh City into chipping in with their money for her urgent childbirth at a local hospital.

The incident happened along bus route No. 13, which runs from Cu Chi District to 23/9 Park in District 1, on Friday afternoon, the city’s public transport management center confirmed on Saturday.

Huynh Thi Nhu Thuy, operator of the bus, said her husband, Huynh Van Cu, was driving the bus that day.

The woman got on the vehicle at the Cu Chi Bus Station, bringing along a young boy, about five to six years old, Thuy recalled.

As the bus approached Hoc Mon District, the woman started uttering a few words and signaling something with her hands.

She did not answer the other passengers as they asked her; instead she pulled up her shirt and pointed at her belly as if she were delivering a baby.

“My husband thought she was in labor. He decided to stop picking up passengers and steer the bus toward the nearest hospital,” Thuy said.

Some passengers chipped in with about VND1 million (US$43) for the ‘pregnant’ lady, while Cu, the driver, gave her VND3 million ($129).

At the infirmary, doctors concluded that the woman was not pregnant, adding that her stomach was big because of belly fat.

She, however, still appeared to be in a lot of pain, thus doctors decided to perform an ultrasound on her, a nurse said.

As she was waiting for the procedure, the woman headed to the restroom, before sneaking out of the hospital with the young boy and taking a bus back to Cu Chi District, along with the cash.

“The money was no big deal, but our trust and kindness were betrayed,” Thuy stated.

Thuy and her husband may also face a fine for going off route and refusing to pick up passengers.