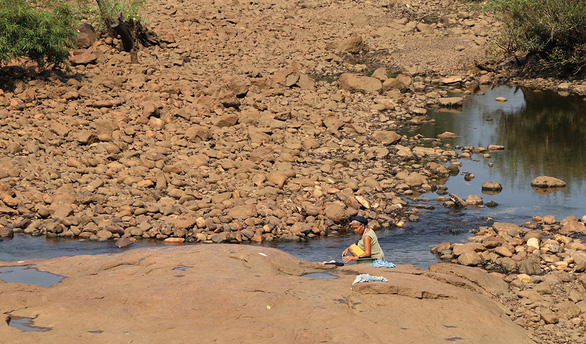 Residents in many areas across Vietnam’s Central Highlands have been deprived of water which is essential to agricultural activities and daily use, even though it is only the beginning of the dry season.

Water levels in lakes, ponds, and streams in Dak Lak and Dak Nong Provinces have lowered significantly, provincial irrigation sectors reported, adding that residents have had to spend their own money drilling more wells.

Y Tuyn Nie, one of the affected farmers in Cu M’Gar District, Dak Lak, said he currently has one pond and a well to provide water for his coffee plantation and paddy fields.

“The pond is already empty, while the well is also drying up. If I cannot drill another well, all of my crops will wither,” Nie stated.

There are approximately 554 irrigation works across Dak Lak Province, many of which have already run out of water, local authorities said, adding that the remaining ones may also become insufficient for agricultural activities in the coming time.

Meanwhile, many residents in An Khe Town, Gia Lai Province, have been deprived of fresh water over the past few days, according to the town’s administration.

A major water factory, designed to supply nearly 15,000 households, has ceased operating after water levels in the An Khe reservoir became too low.

Many people have been forced to find water along the Ba River. They also bathe and wash their clothes along the waterway.

The drought has become serious even though it is now only the beginning of the dry season, said Tran Trung Thanh, an official from the hydro-metrological station in the Central Highlands.

The situation is the result of the early ending of last year’s rainy season, Thanh elaborated, adding it is likely to worsen in the near future.

Areas in southeast Gia Lai Province will suffer the heaviest toll, he stated.