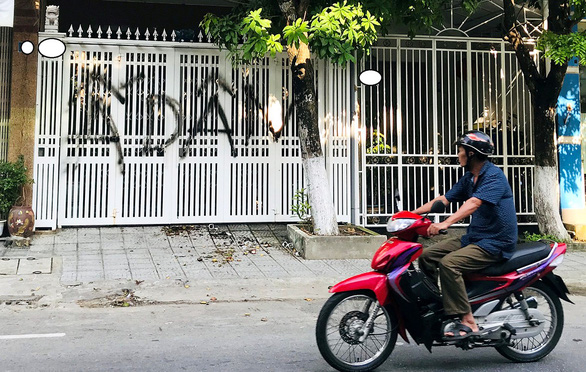 The wife of Nguyen Huu Linh, a former procuracy official who is being probed for child molestation, has withdrawn a denunciation letter against her supposed insulters, just hours after she submitted it to police in the central Vietnamese city of Da Nang.

The district's police unit confirmed earlier the same day that Tan had submitted the document, stating that multiple individuals and organizations had insulted and humiliated her and her family.

She reiterated how her house was defaced and smeared with paint and dirty substances, and how photos of herself and her children were shared on social media for public shaming.

The only request she has for local authorities now is to ensure safety and security for her family, said Colonel Tran Phuoc Huong, chief of police in Hai Chau District.

On Friday, Tan penned a ‘heartfelt’ letter to the municipal Department of Police, stating that she and her children “have tried to deal with public pressure” during this tough time, but they were “no longer able to bear it anymore.”

They had been too frightened to return to their house, Tan wrote.

The wife acknowledged that what her husband did was wrong and extended her apologies, saying she was partly responsible for his mistake.

“But my children and other family members have nothing to do with this,” she said.

Tan’s husband, Linh, is currently being probed by police in District 4, Ho Chi Minh City for molesting an under 16-year-old person.

The man, who is former deputy head of the Da Nang People’s Procuracy, has yet to be arrested but is required not to leave his place of residence.

The alleged sexual harassment occurred at around 9:10 pm on April 1 and was caught on CCTV installed in an elevator of the Galaxy 9 apartment building in District 4.

In the video, Linh could be seen grabbing and kissing a young girl, estimated to be somewhere between five and seven years old.

Legal procedures against Linh were initiated last Sunday, 20 days after the incident.

Prior to this decision, the public had been pressing police to file charges against the man.

His house in Da Nang was repeatedly smeared with paint and dirty substances.

The management board of the Galaxy 9 had submitted a petition to Ho Chi Minh City authorities, demanding that legal proceedings be launched against Linh.