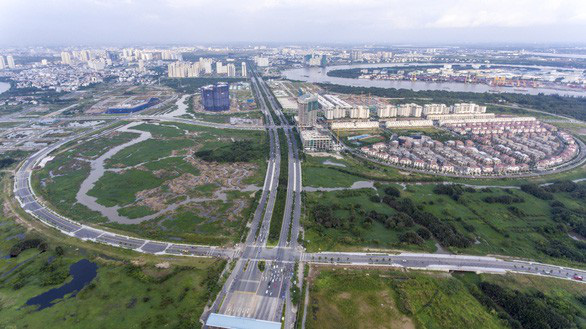 Vietnam’s government inspectorate announced on Wednesday results of an inspection of the implementation of the Thu Thiem New Urban Area project in Ho Chi Minh City, pointing out multiple wrongdoings of the municipal administration and several other agencies.

Approved by the prime minister in 1996, the Thu Thiem New Urban Area project was designed to cover an area of 930 hectares in District 2, with a population of approximately 200,000 residents.

According to the state inspectorate, the misallocation of state funds of the Ho Chi Minh City administration in carrying out this project involves capital allocated for the construction of four major streets with a combined length of 12 kilometers, within the urban zone.

The municipal People’s Committee had selected Dai Quang Minh JSC as the BT (build-transfer) developer for the road construction without having a thorough evaluation of the firm’s competency as per regulations.

The administration also approved the total investment for the road project, which was more than VND12.18 trillion (US$523 million), without consulting competent agencies.

The inadequate evaluation of the total cost of the project resulted in over VND1.5 trillion ($64 million) worth of state capital misused, according to the government inspectorate.

BT contracts, which are mostly awarded without bidding, involve private contractors taking on infrastructure construction projects in exchange for the rights to use one or multiple land plots as payment.

In this case, the Ho Chi Minh City administration handed over seven land plots to Dai Quang Minh in return for the implementation of the road project.

The administration also allowed Dai Quang Minh to pay land-use fees for these pieces of land at much lower rates than the true value of the properties, causing losses worth about VND3.9 trillion ($167 million) to the state budget.

The government inspectorate discovered some other irregularities in the construction of the Thu Thiem 2 Bridge - another infrastructure project developed by Dai Quang Minh in the new urban area.

Vinacomex, a state-run company, was initially chosen as the developer for the bridge, but the contract was eventually awarded to Dai Quang Minh.

The Ho Chi Minh City administration then permitted Dai Quang Minh to change the design of the bridge to have six lanes instead of four.

The city’s administration did not report the developer and project design changes to the prime minister as required, the state inspectors said.

The approval of about VND252 billion ($10.8 million) in the cost of the construction was also incorrectly made.

The inspectorate required the Ho Chi Minh City administration to retrieve and return more than VND26 trillion ($1.1 billion) worth of state funds it had wrongly channeled into the implementation of the Thu Thiem project to the state budget by December 31.

The municipal People’s Committee must also review the responsibility of individuals and organizations that are involved in the said violations.

Meanwhile, the government inspectorate will submit its findings to the Party’s Central Inspection Committee to decide suitable disciplinary actions for those responsible.

In early September 2018, the government inspectorate announced that the municipal People’s Committee and several government bodies were held accountable for shortcomings in submitting plans for design and resettlement in the Thu Thiem area.