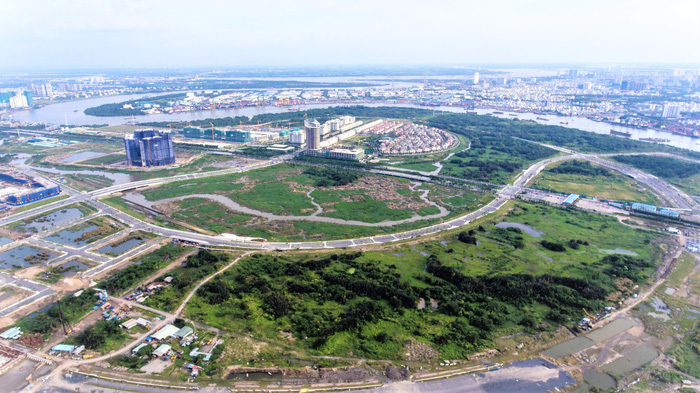 The Ho Chi Minh City administration and several government bodies violated the law and protocols in resettling residents in the city’s Thu Thiem area, where a massive project is under way to build its future center, the Government Inspectorate announced Friday.

The municipal People’s Committee, the Ministry of Construction, and the Government Office are responsible for shortcomings in submitting, evaluating and consulting on resettlement areas in the Thu Thiem New Urban Area project, state inspectors found.

Inspection was launched into the ambitious project following complaints made by residents of Thu Thiem, which sits on the opposite bank of the Saigon River to downtown District 1, that their houses were up for clearance despite being located outside of the project’s scope, and that compensation was meager compared to the market value of their estates.

Thu Thiem was designed to be a modern, sustainable urban area with regional scale and standards, expected to share the population stress on the southern metropolis’ current downtown area once finished.

However, during implementation of the project, the city’s People’s Committee and relevant departments had allowed wrongdoing to take place, prompting complaints from residents, the government inspectorate concluded.

The inspectorate said that a prime minister decision in 1996 approving the master plan for the new urban area was competent and effective.

However, the city’s People’s Committee, the Ministry of Construction and the Government Office had allowed the plan to be extended by ten hectares compared to the area previously assessed by the construction ministry.

Some important files attached to both Thu Thiêm and a 160-hectare resettlement area were reportedly missing.

Another document submitted by the city asking the prime minister to issue a decision to recover the entire area of land planned for Thu Thiem reportedly lacked exact boundaries and the location of the resettlement area.

State inspectors also found that the implementation of some projects inside the Thu Thiem new urban area lacked a legal basis.

The municipal administration’s plans for the recovery and allocation of land for the construction of resettlement areas were found to be incompetent and in violation of multiple regulations, such as not having resettlement sites in place in accordance with the plan approved by the prime minister.

More seriously, the Government Inspectorate also pointed out that the People’s Committee had violated the law by formulating, submitting and approving a plan to revoke the 160 hectares of resettlement land approved by the prime minister.

As a result, development of the area was stalled by residents’ complaints.

The Government Inspectorate therefore proposed that the construction ministry supported the city’s administration in completing a legal foundation for planning of the Thu Thiem project.

The ministry was also asked to handle organizations and individuals involved in the violations after evaluating the relevant paperwork.

The Government Inspectorate asked the People’s Committee to clarify who was responsible for the shortcomings and violations stated in its conclusion.

The city needed to review and handle the organizations and individuals involved in the approval of planning and adjusting plans for land acquisition, compensation and resettlement, as well those tasked with archiving records, documents and maps.

The city was asked to review each case, especially the households on an area of about 4.3 hectares outside the planning zone in District 2’s Binh An Ward, to compensate, support and offer appropriate resettlement assistance for the people.

More than 100 households in Thủ Thiêm have been complaining for years saying that their land was outside planning area approved by the prime minister in 1996 but had still been cleared.

At a meeting with leaders of ministries, agencies and representatives of the municipal administration on in May this year, PM Nguyen Xuan Phuc assigned the Government Inspectorate to review and clarify the content of complaints about land acquisition, compensation and resettlement support and propose measures to resolve any issues in accordance with the law.

Results of inspection were asked to be made available before July 15.