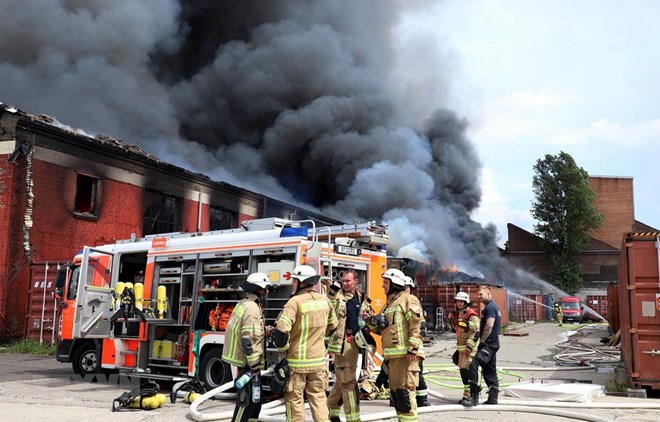 -- A blaze that broke out at a 5,000m2 warehouse of the Dong Xuan Centre, a Vietnamese market in Berlin, Germany, on Thursday was put out hours later, with no casualties reported.

-- The first trial for the case related to Malaysia’s detaining of two fishing boats and 21 fishermen of Vietnam is scheduled to take place today, July 5. The Vietnamese Embassy in Malaysia has been requested to actively carry out necessary citizen protection measures and complete needed procedures for bringing the fishermen back home in case of deportation.

-- Police in the southern province of Tay Ninh said on Thursday they have cooperated with their counterparts in Ho Chi Minh City to bust a cross-border drug trafficking ring, with a suspect caught red-handed riding a motorbike and carrying 4,000 ecstasy pills at An Dong market in the metropolis.

-- Vietnam’s foreign exchange reserves in the first half of 2019 were at “the highest level to date,” Le Minh Hung, governor of the State Bank of Vietnam, said without giving a specific number at a regular government teleconference in Hanoi on Thursday.

-- Vietnam Book of Records (Vietkings) on Thursday honored Dr. Tran Ngoc Luong, director of the Hanoi-based National Hospital of Endocrinology, for being a Vietnamese scientist with the most widely applied medical technique. Luong is the author of ‘Dr Luong Technique,’ a thyroid endoscopic technique that has been used by doctors not only in Vietnam but also developed countries.

-- Vietnam’s GDP growth in the first half of this year was recorded at 6.76 percent, below the target in the most optimistic scenario, Prime Minister Nguyen Xuan Phuc said at a cabinet meeting on Thursday, demanding that ministries, sectors and localities focus on completing all socio-economic targets set by the National Assembly.

-- Vietnam is projected to rake in US$10 billion from exporting aquatic products in 2019, the Vietnam News Agency reported on Thursday, citing figures from the Directorate of Fisheries under the Ministry of Agriculture and Rural Development.

-- Vietnamese manufacturers should use domestically-sourced raw materials to avoid incurring U.S. tariffs, Vietnam’s foreign ministry said on Thursday, days after Washington said it would impose large duties on some steel products shipped through the Southeast Asian country, according to Reuters.

-- The Vietnam Volleyball Federation said on Thursday as many as 13 teams will participate in the Asian Women's U23 Volleyball Championship, which will take place from July 13 to 21 in Hanoi.